Just released FBI crime figures for 2013 show that 699,594 vehicles were reported stolen last year—a 58 percent reduction—from 1991 when vehicle theft reached an all-time high of 1,661,738, according to the National Insurance Crime Bureau which released a national analysis of vehicle theft which compares annual statistics for thefts, population and vehicle registrations from 1960 through 2013.

Over the years, the single-vehicle family—long the norm in America—became the exception as it gave way to families with multiple vehicles. In 1960, there were 74,159,209 vehicles registered across the nation whose population that year was 180,671,158. Registrations as a percentage of that population stood at 41 percent. In 2012, that figure increased to 80.8 percent as registrations climbed to 253,639,386 distributed within the nation’s 313,873,685 in population. 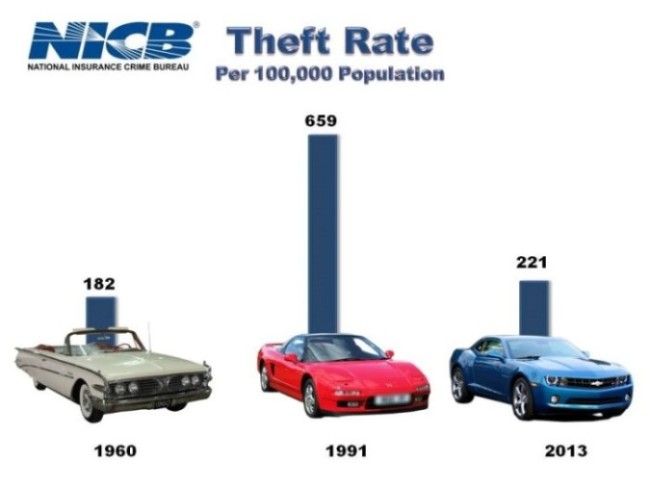 What does all this mean to everyday people?

It means that if you own a vehicle, your chances of having it stolen today are statistically and significantly less than at any other time since 1960. A recent poll by the Gallup organization makes that point more precisely, as it found that 56 percent of Americans rarely or never worry about their cars being stolen.

Over the years, auto theft was so pervasive in many areas that local law enforcement agencies created specialized auto theft investigative units to deal with the problem. Still, preventing auto theft in the first place has always been the challenge. But like any crime, once it occurs, the focus for law enforcement shifts from prevention to resolution and with auto theft, typically that meant recovering the vehicle. The best outcome was the “Triple Play”—recovering the vehicle, arresting the thief and getting him convicted.

The rise in vehicle thefts led to the creation of many auto theft prevention authorities (ATPA)—statewide entities comprised of seasoned investigators and funded, in most cases, by surcharges on auto insurance policies. Today, there are 14 ATPAs in existence.

A dramatic and sustained reduction.

From their peak year in 1991, vehicle thefts have trended downward. From 1991 through 2000, there was a 30 percent decline. From 2000 through 2003, thefts rose a little before falling precipitously and
consecutively each year from 2004 through 2011—43 percent in eight years.

What delivered such results?

There are lots of factors that have combined to produce such impressive results beginning with law enforcement efforts that developed innovative investigative processes. These techniques were then shared across law enforcement communities, and with associations of public and private organizations like the International Association of Auto Theft Investigators (IAATI) and the International Association of Special Investigation Units (IASIU).

Moreover, the insurance industry-supported National Automobile Theft Bureau, predecessor to NICB, was home of the most experienced auto theft investigators dating back to 1912. NATB/NICB has trained thousands of local, state and federal law enforcement officers over its 102-year existence, and today has special agents working alongside their law enforcement counterparts in most major cities across the country.

That collaboration and coordination has been critical in attacking the vehicle theft problem, and the relationships created in those environments have helped maintain impressive investigative results despite the reduction in law enforcement staffing brought about by the Great Recession over the last several years. Those relationships were mature and effective enough to exploit the single most important development in the vehicle theft prevention and investigation—technology.

Technology has had an immeasurable positive effect on vehicle theft whether it’s deployed in the auto manufacturing process as new and more reliable anti-theft protection is engineered into design, or obtained as an after-market option by vehicle owners looking for an additional level of security. Put simply, cars are just more difficult to steal today than ever before and technology has made that possible.

Technology is also law enforcement’s great equalizer, as well. Everything from remote surveillance cameras to automated license plate readers to “bait cars”—technology is a force multiplier that never calls in sick and produces results around the clock.

With the introduction of transponder or “smart keys” which have become increasingly sophisticated since their introduction in 1997, hot-wiring a car is no longer an option for thieves. As a result, they’ve discovered new ways to illegally gain access to vehicles including:

Before a dealer or locksmith makes a duplicate key for a customer, the customer must provide a vehicle’s registration or title information showing that the customer is, in fact, the owner of the vehicle. The NICB works with the National Automotive Service Task Force (NASTF) that has created a data exchange system that allows locksmiths and dealerships to access key codes and immobilizer reset information provided by automobile manufacturers.

NICB maintains a log of all NASTF transactions and NICB analysts examine the data looking for potential signs of fraud, as well as organized group activity resulting in numerous investigations.

Even with all the good news about the decline in vehicle theft, no vehicle is theft-proof.

Anyone with information concerning insurance fraud or vehicle theft can report it anonymously by calling toll-free 800-TEL-NICB (800-835-6422), texting keyword “fraud” to TIP411 (847411) or submitting a form on our website. Or, download the NICB Fraud Tips app on your iPhone or Android device.