With an arctic cold surge and heavy snow accumulations in large parts of the United States last week, potential hazards exist for homeowners and drivers alike, according to the Insurance Information Institute (I.I.I.).

A repeat of this past winter’s deep freeze is possible. All that cold, ice and snow translates into frozen pipes, collapsed roofs, auto accidents and slip-and-fall injuries. In fact, insurance data give us another way to describe just how cold last winter was and how cold it’s likely to be this year. 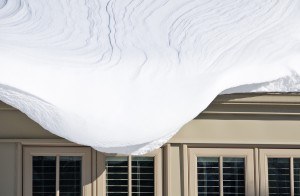 “Severe winter weather is the third-largest cause of insured catastrophe losses, after hurricanes and tornadoes,” said Dr. Robert Hartwig, president of the I.I.I. and an economist. “Losses from snow, ice, freezing and related causes averaged $1.2 billion annually over the past twenty years,” he said. “This year insured losses from severe winter events will be at least double that amount, likely exceeding $2.5 billion by year’s end, making 2014 the fourth costliest year on record for winter storm losses,” Hartwig added.

“Winter storm claims, including those associated with freezing and ice damage, accounted for 6.4 percent of all insured catastrophe losses between 1994 and 2013, placing it third behind hurricanes and tropical storms (41 percent) and tornadoes (36 percent) as the costliest natural disasters,” Hartwig said, adding that 2013 winter losses totaled $1.8 billion.

This year it’s even worse. Even before cold and snow once again gripped much of the nation this month, Munich Re reported there were already 11 winter storms and cold waves occurring in the January through March period, causing 84 fatalities and an estimated $2.4 billion in insured losses. In fact, the Polar Vortex event that took place January 5-8 caused freezing, wind, ice and snow in 17 states and cost nearly $1.7 billion in insured losses, according to Property Claims Service for Verisk Insurance Solutions.

Indeed, in the first quarter of 2014 the Eastern U.S. experienced its coldest winter in over a decade, according to Munich Re. And America as a whole is experiencing its coldest November since 1976, Weather Bell models noted.

Auto claims always spike in the winter, thanks to snowy, icy roads but this past winter was worse. According to data from Verisk’s Insurance Services Office, 42 states saw auto insurance claims rise in the first quarter of 2014, compared with a year earlier. Several upper Midwest states (Illinois, Minnesota, Indiana and Michigan) saw collision claims rise over 20 percent. Countrywide, claim frequency rose 8.5 percent from a year earlier.

The effects spilled over into the workplace. Winter-related slip-and-fall claims at Midwestern workplaces doubled in 2013-2014 from the previous year, according to Accident Fund Insurance Company of America and United Heartland, specialists in workers compensation insurance. Such accidents represent 29 percent of all workers compensation claims.