A mobile app from a law enforcement technology firm could soon allow emergency responders from different agencies to communicate seamlessly with each other in a crisis for the first time, sharing files and conducting impromptu conference calls.

BlueLine Grid’s applications target what has long been one of the most vexing challenges facing U.S. law enforcement and emergency responders. Communications breakdowns hampered responses to the Sept. 11, 2001 attack in New York and disasters including 2012’s Superstorm Sandy. 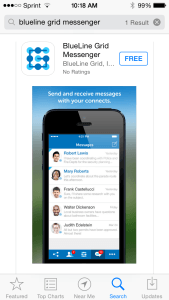 “It tells you who is near you, who can help you and allows you to communicate effectively with them,” said David Riker, chief executive officer of privately held BlueLine Grid.

Because the app relies on wireless connectivity it could fail during a disaster, so it is intended to supplement and not replace traditional emergency communications, Riker said.

BlueLine Grid is a law enforcement technology firm co-founded by New York Police Commissioner Bill Bratton in 2013, who since cut ties to the company to avoid conflicts of interest before returning to the NYPD in January.

The app would be the first to connect individual responders working in the field, using common standards shared in Android and iOS to enable communications between police, fire and other agencies in different jurisdictions, Riker said.

BlueLine Grid uses similar technology to Skype which is known as over-the-top (OTT) voice and messaging, meaning the services run on top of the wireless network, to solve the problem of interoperability.

Experts say that developing better communications systems is one of the key challenges in ongoing efforts to improve security preparedness.

“We have so much law enforcement in the U.S. – more than 700,000 agencies – and each of them has their own method of collecting and sharing information,” said Jim Bueermann, president of the non-profit Police Foundation.

“Finding a platform that is web-based works on mobile platforms and is easy to use is, I think, the holy grail of information sharing,” said Bueermann, a former chief of the Redlands, California police department, which is testing an inter-agency data sharing social media app called CopBook.

Earlier this month, John D. Cohen, the former head of intelligence for the Department of Homeland Security, joined BlueLine Grid’s corporate board.