As Independence Day nears, emergency departments and trauma centers nationwide are already beginning to treat patients injured by fireworks. According to the Consumer Product Safety Commission, hand and finger damage are the most common injuries caused by fireworks and account for 32 percent of all injuries reported.

And that can have huge financial, social, and social media implications.

“Losing a finger can mean no more texting which really resonates with people today as a deterrent to risky summer behavior,” says John Santaniello, MD, trauma surgeon at Loyola University Medical Center. “Lighting up YouTube with an awesome pyrotechnical display for your friends may result in blowing off your thumb, ending for good your ability to communicate using a handheld device.” 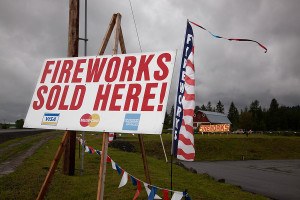 One report of seven states revealed that the cost of stay for those hospitalized due to a fireworks-related amputation of a finger, thumb or lower arm, was $15,600. Total costs for all fireworks-related injuries in this study was estimated at $1.4 million.

Also prevalent are head and eye injuries, which account for 19 and 18 percent of total reported injuries respectively. “Fireworks are basically explosives and all are capable of causing severe injuries, but even minor injuries can cause significant functional disability when it comes to hand and eye function,” said Santaniello, a former Marine. “Fireworks are not toys.”

Fireworks that are considered legal are still very dangerous. Fireworks burn at approximately the same temperature as a household match and can cause burn injuries and ignite clothing, if used improperly. Sparklers burn at nearly 2000 degrees Fahrenheit at their center.

“Even fireworks that are classified as ‘safer,’ such as bottle rockets and sparklers, are responsible for some of the most serious wounds treated by emergency physicians,” said Santaniello, a trauma surgeon who is also a professor of surgery, at Loyola University Chicago Stritch School of Medicine in Maywood.

In states that have been experiencing droughts, the stakes are higher. “Droughts bring an added risk of danger as sparks ignite highly combustible matter, such as grass and roofing,” warns Santaniello. According to the Alliance to Stop Consumer Fireworks, in 2010, fireworks caused an estimated 15,500 reported fires, resulting in eight civilian deaths, 60 injuries and $36 million in direct property damage.