Leonard McGarity flew countless miles during a quarter-century as an American Airlines pilot, captaining the most sophisticated planes in commercial aviation.

But in his spare time, the 58-year-old McGarity enjoyed outings in his SUV-sized, experimental, amateur-built aircraft, taking off and landing on an airstrip within throwing distance from his home at the Wellington Aero Club.

“With aircraft, people always want to know: Why are they falling out of the sky?” said Scott Thatcher, an engineer from Palm Beach Gardens who has flown planes for 60-plus years. “But they’re not. It’s just that it happens so infrequently that when they do, it’s of major interest.” 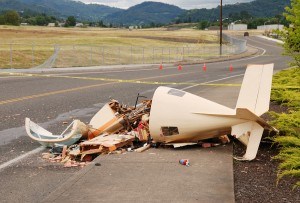 It’s of particular interest when accidents involve planes like the one owned by McGarity, which are delivered in boxes via semi-trailer trucks, cost as little as $25,000 and can be assembled by anyone with a monkey wrench and a garage. Categorized as “experimental” by the Federal Aviation Administration, the planes are limited to recreational, non-commercial purposes and must have at least 51 percent of its assembly completed by an amateur builder.

Flying afficionados fear that words like “experimental” and “amateur-built” give the public the wrong impression. They point out that planes like McGarity’s undergo rigorous FAA inspections and must fly for up to 40 hours over unpopulated areas before they are deemed airworthy. Pilots are required to maintain the same training and ratings as those that fly such production aircraft as Cessnas or Beechcrafts.

William Perry, a technical counselor for the Experimental Aircraft Association and an engineer at Pratt & Whitney in Jupiter, said home-built planes “are not scary at all.”

“Most experimental airplanes that I’ve inspected have superb workmanship,” said Perry, who has home-built five planes himself. “The guy building that plane knows he’s going to put his butt and his family on that airplane and go flying with it. So why would he cut corners and do stupid things?”

An average home-built plane will take anywhere between 1,000 and 3,000 hours to construct, according to industry insiders. While they can be assembled within a year, former U.S. Navy pilot Kenneth Kopp spent 21 months and around $80,000 customizing his RV-8 plane that he’s flown for 500 hours and used on cross-country trips.

“The word experimental makes some people nervous because they envision some uneducated guy in his garage with his hammer and blow torch hodge-podging things together,” said Kopp, a helicopter test pilot in Jupiter. “But, by and large, the experimental market is represented by lots of professional, well-educated, very meticulous kinds of people who put their heart and soul into their airplanes.

Kopp points out that all planes, from Orville and Wilbur Wright’s first flying machine to the Boeing 787 Dreamliner, began as experimental.

“If it wasn’t for experimental planes, we wouldn’t have aviation today,” Kopp said. “It’s part of the normal development process for flying.”

But are experimental aircraft safe?

Individual owners insist they are, although the numbers are somewhat mixed.

A 2012 study by the National Transportation Safety Board revealed that amateur-built aircraft made up nearly 10 percent of U.S. general aviation planes in 2011, but accounted for 15 percent of all accidents and slightly more than 20 percent of fatal accidents.

There are around 33,000 home-built aircraft registered in the United States with about 1,000 new planes added to the rolls each year, according to industry sources. With production aircraft costing around $250,000 along with thousands more in annual maintenance fees, the popularity of experimentals isn’t expected to wane any time soon even after accidents like the one that cost McGarity his life.

“There are thousands of experimental aircraft out there being flown for thousands of hours and when one person has something like this happen, the planes get a huge bad rap,” said Dr. Jeff Johnson, dean of Lynn University’s School of Aeronautics and a U.S. Air Force fighter pilot for 15 years. “But they really are very safe airplanes, and the people that fly them are typically very safe.”

People who get themselves in trouble in home-built planes are generally pilots with “a lot of flying experience that want to go out and do more stuff than the airplane was ever designed to do,” Johnson said.

It will be months before the NTSB determines what caused McGarity’s plane to crash. Friends speculate that a mechanical problem likely caused the crash, adding that McGarity was a complete pro in the cockpit unlikely to have suffered a fatal lapse in judgment.

“These are proven planes, but anything can break or have failure,” said Kopp, a friend of McGarity’s who had flown formations with him. “Just like driving down the road, you never know when you’re going to get a flat tire. The problem is, in an airplane you can’t just pull over to the side of the road.”