Children are dying less often in traffic accidents: Over a decade, the number who died in crashes dropped by 43 percent, according to a new government report.

Health officials say the increased use of car seats and booster seats drove the decline. Still, one-third of the children 12 and under who died in 2011 were not buckled up.

Most Booster Seats Do Well in New Safety Rankings

“The first step is buckling up. Every child, of every age, on every trip,” said Dr. Tom Frieden, director of the Centers for Disease Control and Prevention.

The CDC report focused on crash deaths of children 12 and under and covered 2002 through 2011, when traffic fatalities overall declined to levels not seen since the 1940s.

Young children traditionally have been only a small fraction of total traffic deaths. In the last year of the study, children accounted for 650 of the 21,000 deaths of drivers and passengers. Preliminary CDC figures for 2012 show child deaths continued to fall, to 637.

The CDC study was not designed to answer why the deaths of younger children declined. But experts credited a large growth in state laws requiring car seats and booster seats, and in programs that promote buckling kids up.

But there’s been a racial disparity in how well that’s worked. Almost half of the black and Hispanic children who died in crashes in 2009 and 2010 were not in safety seats or wearing seat belts, compared to a quarter of white deaths, according to the CDC. 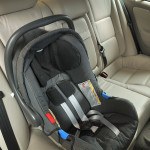 That may be related to income, experts said. Car seats can run well over $100 and be challenging to install. Larger proportions of minority families may have trouble getting the money or help to put them in. Frieden noted there are community programs that provide help and subsidies for car seats.

Health officials urge parents to keep all children 12 and under in the back seat, and use car seats and booster seats until seatbelts fit properly. They recommend that car seats should face the rear up to age 2.