When Amy Derby started working at UnityPoint Health-St. Luke’s as a registered nurse 13 years ago, she had to lift patients manually with the help of other staff members.

Every year, Derby said, it seems as if the number of obese patients she cares for grows. The heaviest person she has moved in her career so far was 650 pounds.

Although Derby has never suffered a back injury moving patients, she said the task causes occasional soreness.

“I think probably every nurse has felt sore,” she told the Sioux City Journal. “There’s a lot of manual labor involved with nursing that a person doesn’t realize when they first go into it.”

The American Nurses Association (ANA) says disabling musculoskeletal injury is one of the top safety concerns of nurses and is primarily caused by handling patients.

According to a 2011 ANA survey that included 4,614 respondents, 42 percent of registered nurses reported being injured on the job at least once in 12 months, while 56 percent said they had experienced musculoskeletal pain caused by or made worse by their job.

The number of days-away-from-work cases for private sector nursing assistants was 44,100 in 2012, according to the U.S. Department of Labor. Overexertion and bodily reaction caused 55 percent of the cases, while 18 percent were the result of slips, trips and falls. These Illnesses and injuries led nursing assistants to take a median of six days off of work to recover. 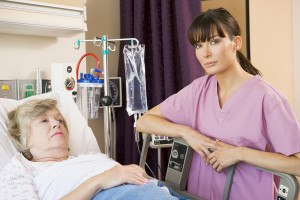 “We have something called a Maxi Slide, which is like swishy pants material,” she explained. “You roll it underneath the patient and you can move them right over. We’ve gotten those in the last two years; and we have enough for every single patient in the med/surge areas.”

St. Luke’s has two types of hoyers that consist of a fabric sling that is placed underneath the patient’s body and an aluminum lift that picks them up. One of the hoyer lifts is electric, while the other is manual.

“It’s not easy to use,” Derby said of the manual one, which requires nurses to pump it into the air. “It builds up your body strength real quick.”

Lacy Bohlke, a certified nursing assistant who has been working at St. Luke’s for a year, recalled a 400-pound patient who was hesitant to get into the lift.

“She was terrified,” she said. “She kept asking, `Is this sling going to hold me?’ We just have to reassure them.”

Teresa Muckey, clinical educator at Mercy Medical Center-Sioux City, said new nursing hires have to be able to lift 50 pounds and successfully complete a fitness test, which consists of hauling stagnant loads, bending down and standing up.

Like St. Luke’s, the hospital promotes working in teams and has devices at its disposal to help nurses lift patients

“That’s something relatively new that’s been added over the last several years because of the increase of back injuries and such,” she said.

Amy Petekavich, a first-year nursing student at St. Luke’s College UnityPoint Health, learned lifting techniques in the classroom by moving medical mannequins in and out of bed in teams with a gait belt, a device used to transfer patients from one position to another.

The college, located on the hospital’s campus, has a nursing laboratory that resembles a patient room and is equipped with real medical equipment.

“They make sure they’re teaching us the proper steps so we don’t have any problem lifting people,” Petekavich said.

When Beth Sitzmann, assistant professor of nursing, entered the profession, she said it was all about care and compassion. Now, she said providing quality care and meeting safety standards are top priorities. At the college, she said students learn about the financial impact their job performance can have on their employer.

“If you want to keep your job, you have to make sure you’re meeting these standards,” she said. “If you don’t do certain things well it has a huge impact on the hospital and the organization.”

Lupita Angulo, a first-year nursing student, said moving mannequins from their beds into wheelchairs made her nervous during skill validations. Sitzmann said the mannequins are actually harder to lift than real patients due to their stiffness.

“It makes it more real,” she said. “There’s a difference with a mannequin who can’t interact with you.”