Here’s another modern-day belief you can kick to the curb: So-called ergonomic keyboards are no better than regular keyboards for those who have suffered from typing injuries.

University of Pittsburgh professor Nancy Baker looked at whether the keyboards that are marketed as being ergonomic help with recovery from typing injuries more than the standard keyboards included with the purchase of a desktop computer.

Her research found the results were about the same. There were 77 participants in the study, which will be published in an upcoming edition of Work: A Journal of Prevention, Assessment & Rehabilitation.

About two months into her study, 80 percent of the participants said they were pain free whether they were given the alternative keyboard or a standard model.

“I don’t know why both keyboards worked as well as they did,” Baker said. But the significant finding was there was no significant difference between the two designs.

Baker, who has a doctorate in therapeutic studies, did her clinical training in occupational therapy.

The study involved people who suffered pain in their hands, wrist or neck and back from repetitive injuries caused by typing. Baker videotaped them typing, using a special 3-D system of 12 cameras that can capture the motion of a user’s hands. Each participant was handed a keyboard and told it would be effective in reducing their pain.

Participants also filled out weekly surveys on their pain levels. The study was funded by the National Institute for Occupational Safety and Health. 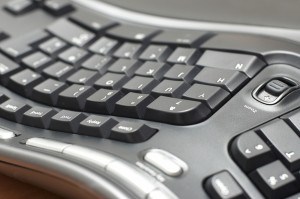 “The so-called ‘ergonomic’ keyboards are the No. 1 selling keyboards in the entire country,” Baker said.

She doesn’t call the slightly twisted keyboards “ergonomic.” Instead she uses the word “alternative” because to Ms. Baker, who has spent her career working with occupational injuries, “ergonomic” is a word that means a work station is specially fitted to the user, not a one-size fits all, out-of-the-box solution.

“Alternative keyboards do make your wrist posture a little bit better, but they make the posture of these joints,” she said while pointing to her knuckles, “a little bit worse.”

Wrist and hand injuries associated with keyboards use only came into being with the invention of the computer.

“It’s not entirely clear why people develop pain with typing,” Baker said. “With the manual typewriter, there were built-in stops.”

She said in the days of the typing pools using manual — and later electric — typewriters, typists had to stop at the end of each line and return the carriage or change the paper.

Now, with computers, users can type for hours without built-in pauses. In addition, she said, “More people are typing and people are not trained.”

Patty Kummick, the director of development for the University of Pittsburgh’s School of Health and Rehabilitation Sciences, signed up to participate in the study because she was experiencing pain from typing.

Kummick said she can be on the computer for hours: “I’m always typing.”

When she joined the study and received a standard keyboard, she believed it had been altered to help with her pain. Within weeks, she felt better. But the keyboard was just a standard Lenovo keyboard that comes with computers.

Even so, she wanted that keyboard back and bought her own when the study was over.

“I really expected the alternative to be better,” Baker said.

She said the alternative keyboards she also used as part of the study had one drawback she had not considered: It takes a long time to get used to the design in which the keys aren’t where users expect them.

“I had the worst time with the numbers,” she said.