For patients with herniated discs in the lower (lumbar) spine, surgery leads to greater long-term improvement in pain, functioning and disability compared to nonsurgical treatment, an eight year follow-up study in Spine concluded. The journal is published by Lippincott Williams & Wilkins, a part of Wolters Kluwer Health.

“Carefully selected patients who underwent surgery for a lumbar disc herniation achieved greater improvement than non-operatively treated patients,” according to lead author Dr. Jon D. Lurie of Dartmouth-Hitchcock Medical Center and the Geisel School of Medicine and colleagues. The results add to the evidence for surgical treatment of herniated discs—but also show that nonsurgical treatment can provide lasting benefits for some patients. The study has been posted ahead of print on the journal website; it will be published in the January issue of Spine.

No Difference in Outcomes for Assigned Treatment…

The researchers analyzed data from the Spine Patient Outcomes Research Trial (SPORT), one of the largest clinical trials of surgery for spinal disorders. In SPORT, patients meeting strict criteria for herniated discs in the lumbar spine underwent surgery or nonsurgical treatment such as physical therapy, exercise, and pain-relieving medications.

Patients with herniated discs experience back pain, leg pain (sciatica), and other symptoms caused by pressure on the spinal nerve roots. 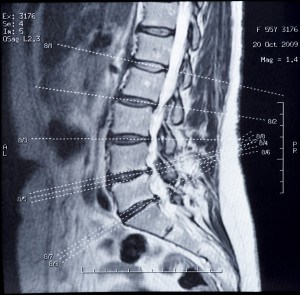 The current analysis included eight-year follow-up data on 1,244 patients treated at 13 spine clinics across the United States. About 500 patients were randomly assigned to surgery (a procedure called discectomy) or nonsurgical treatment, although patients were allowed to “cross over” to the other treatment.

For the remaining patients, decisions as to surgery or nonsurgical treatment were left up to the patients and their doctors. Standard measures of pain, physical functioning, and disability were compared between groups.

Consistent with previous data from SPORT, patients assigned to surgery tended to have better outcomes. However, because many patients did not actually undergo their assigned treatment, the differences based on “intention to treat” were not statistically significant.

…But Better Outcomes with Surgery, Based on Actual Treatment

When outcomes were compared for patients who actually underwent surgery versus nonsurgical treatment, significant differences emerged. On a 100-point pain scale, pain scores averaged about 11 points lower in the surgery group. Measures of physical functioning and disability showed similar differences.

Surgery also led to greater improvement in some additional outcomes, including the bothersomeness of sciatica symptoms, patient satisfaction, and self-rated improvement.

While average outcome scores were better with surgery, many patients had significant improvement with nonsurgical treatment. After eight years, about one-third of patients who were clinically indicated for surgery have chosen not to have operative treatment.

SPORT Principal Investigator Dr. James N. Weinstein said this is significant and shows the important role that shared decision making plays in the process: “Every patient in the SPORT study went through shared decision-making, during which they reviewed objective information about the risks and benefits of their treatment options. This allowed them to make an informed choice, in line with their own values. That about a third of these patients have continued to be satisfied with their choice is in large part due, I believe, to their being active participants in the initial decision-making process” Weinstein said.

Lumbar disc surgery is one of the most commonly performed operations in the United States, although rates vary considerably in different regions. Past studies have suggested that surgery provides faster pain relief and recovery for patients with herniated discs, compared to nonsurgical treatment. However, it has been difficult to determine the true effects of surgery—especially because of the high number of patients who cross over from nonsurgical treatment to surgery. This tends to underestimate the true benefits of surgery.

The long-term follow-up results from SPORT show that, for patients with confirmed herniated lumbar discs, “[S]urgery was superior to non-operative treatment in relieving symptoms and improving function.” Dr Lurie and coauthors note that the peak benefits are achieved within six months after surgery and persist through eight years.

However, many patients treated without surgery “also showed substantial improvements over time,” the researchers write. They add that patients who crossed over to surgery were more likely to be dissatisfied with their symptoms, felt like their symptoms were getting worse, and had initially worse physical function and disability.