A new, water-based forensic marking technology promises to reduce property crimes by 50-60 percent, according to Logan Pierson, president of SmartWater CSI, LLC. The company, in existence for 17 years in the UK, recently established a presence in the United States, in Fort Lauderdale, Fla.

It was developed by a former law‑enforcement officer, Phil Cleary, after he retired with injuries on the job. He and his brother, Mike Cleary, a forensic chemist, created a water‑based solution that can be used to mark anything of value, from jewelry to industrial equipment, with a unique mark indicating its owner.

“The solution devised by Phil’s brother Mike created a one‑in‑a‑billion signature, using water and rare‑earth metals, which basically are elements. These combinations, and there are currently 26 different elements within this water‑based solution now. Each time we add another element to that mix, it adds another billion signatures,” Pierson said.

According to Pierson, the water‑based solution doesn’t wash off.

“It is virtually impossible to remove from metals or clothing. It is…certified for five years by the British Standards Institute,” Pierson added. 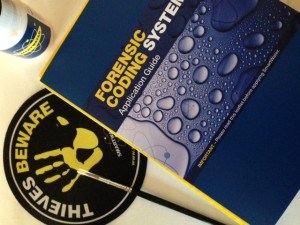 He said the forensic marker has been protecting the UK’s National Rail for more than 10 years. Thieves have tried to remove the marking to no avail.

“When you have something that’s marked, the bad guy has to have the psychological aspect that tells him not only is it marked, it’s going to be almost impossible to remove, and if it’s been out there for a lot of years, it’s still going to be there. They’ve had cases in the UK where people have stolen copper wiring, for instance, and they’ve tried to sandblast,” Pierson said. “They try to remove it by sandblasting, acid, bleach. They can’t do it. In fact, sandblasting simply takes SmartWater and applies it on more of the product than was there before, because it’s like dust, it just blows it up.”

He said many pawn shops and secondhand metal recyclers in the UK are aware of the forensic marker.

“They know they can’t take it in there because those folks black‑light valuables, whether it be a computer or whether it be a TV or perhaps even copper wiring,” he said.

A major benefit is that the solution can withstand almost any type of weather condition. Pierson provided an example of its use on catalytic converters.

“It can withstand very high heat. We actually have a high‑heat product that will go on catalytic converters. Catalytic converters are a huge problem for trucking companies, because they can be removed very easily and it’s almost considered a victimless crime. It’s not. When you lose a catalytic converter…it can cost $1,500 to $2,500 to replace,” said Pierson.

The marking technology is used in 95 percent of the police stations in Great Britain.

“In those police stations, when you come in and you’re booked, for virtually any crime, they take a black light and they shine it on you to see if you have SmartWater on you,” according to Pierson.

After the company established a presence in the U.S., it began working with the Fort Lauderdale police department in an area called South Middle River. One of the largest areas in downtown Fort Lauderdale, Pierson said it has over 2,500 residential dwellings and has dealt with systemic crime for the past 10 years.

“The city purchased 500 kits, what we call the Community Outreach Kits, with…an applicator that has 10 milliliters of SmartWater solution in it. Those folks were then given that product, and they were able to mark 50 to 60 items in their home, and were also asked to register not the items that they marked but the fact that they were a SmartWater home, and also to put decals out in their front yard, backyard and such, telling people that we have SmartWater marked on our valuables at the house,” said Pierson.

Within the first eight months, the community had a 21 percent decrease in property crimes, he said.

“Once people know that the product is a deterrent, they’re not sure what you marked…they stay away, and that’s why we’re having these dramatic crime reductions,” Pierson said.

Pierson described the company’s marketing philosophy, which begins by proving to law enforcement that the solution works by providing residential areas kits so that an entire neighborhood can be protected.

“There isn’t a mayor or a police chief or an insurance company, for that matter, that doesn’t benefit by having a community with less crime. Our first step is going in to law enforcement and working with them. The second step, and the third step perhaps, is that you’re out in the community and then you go to commercial entities, such as insurance companies, and say, ‘Look, here’s what’s happening in these communities. Crime is being deterred, and we’re having far less burglaries.’ With far less property crimes, you have less violent crimes and such. You have less vehicle crimes. It does make for a safer community,” Pierson said.

According to the company president, since being used in the UK for almost two decades, there have been more than 1,200 convictions as a result of the marking system and no case has ever been lost that had SmartWater involved in it.

“We think we can save everybody money by first deterring the crime, not just having someone steal it and then have to pay for it through the insurance,” Pierson said. “We think that the proof shows that we actually will deter crime.”

Listen to the podcast interview with Logan Pierson, president of SmartWater CSI, LLC