With an estimated 140 million Americans predicted to shop this past weekend, retailers bolstered security, deployed Segway patrols and put on live music to distract shoppers and avoid the deal-hunting scrums that can foster Black Friday tramplings. 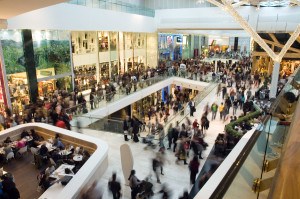 Malls beefed up patrols with off-duty cops. Chains including Wal-Mart Stores Inc. used quota systems for popular doorbusters from iPads to jewelry. Yet all was not peaceful. In one incident, uploaded to YouTube, uniformed security officers handcuffed a female shopper at an unidentified Wal-Mart store after a tussle over a television. Bill Simon, chief executive officer of Wal-Mart’s U.S. division, was asked about the incident on a conference call today with reporters.

“Any time you get more than 22 million people together you’re going to have some behavior you’re not proud of,” said Simon, who also said “the number of incidents” was down from last year and that it’s “hard to tell what happened in any individual incident.”

The National Retail Federation issued crowd management guidelines, urging stores to prepare for flash mobs, long lines of angry customers and crowded washrooms. The Washington-based trade group has sent out the memo annually since a Wal-Mart worker was trampled to death in 2008 during a Black Friday melee.

Sales from Black Friday through Cyber Monday will increase 2.2 percent to $40.5 billion, IBISWorld Inc. predicted. General merchandisers such as Wal-Mart, Target Corp. and Sears Holdings Corp. typically attract the biggest crowds. That’s because shoppers want to get everything at one place on a day when traffic and parking are challenging, said Rich Mellor, the NRF’s vice president of loss prevention.

Shoppers are “anxious to be first,” he said. “They get really rambunctious coming in the door. You have to be informative so they’re not going crazy looking for whatever.”

At a Wal-Mart in Garfield, New Jersey, police arrested a woman for spitting at another woman and hitting her child instead, Captain Darren Sucorowski said in a statement. A man screaming vulgarities in the same store also was arrested, Sucorowski said.

At a Wal-Mart store in Elkin, North Carolina, Brian Spain, an actor and filmmaker who lives in the Bronx, captured another fracas over a TV on his phone. Before the fight broke out, Spain, 33, was marveling at how peaceful everyone was.

“I told myself ‘it’s so calm,’” said Spain, who was visiting his family. “Everyone’s polite. It’s not the way it is in New York.”

Spain wanted to interview people about shopping on Thanksgiving — which he opposes — and posted the video online after Wal-Mart workers threatened to kick him out of the store or have him arrested for trespassing, he said.

Stores ramped up security precautions earlier than ever this year because so many chains opened their doors on Thanksgiving Day. Nearly a quarter of shoppers, or 33 million people, intending to hit the stores this holiday weekend planned to shop yesterday, according to an NRF survey.

With more stores opening on Thanksgiving, malls have been seeing more guests who drank too much booze with their turkey, said Garth Gasse, director of retail operations and asset protection at the Retail Industry Leaders Association, an Arlington, Virginia, trade group.

“They’ve probably consumed a few and they probably shouldn’t be out shopping,” Gasse said.

Even as retailers prepare for potential trouble during the annual shopathon, they’re piling on the discounts to persuade wary shoppers to spend. The uneven U.S. economic recovery, with its lackluster jobs growth, has undermined consumers’ confidence to make discretionary purchases. On Nov. 22, ShopperTrak, a Chicago-based researcher, reiterated a projection that holiday sales will advance 2.4 percent, the smallest rise since 2009.

Black Friday safety became a preoccupation for retailers after the Wal-Mart worker’s death five years ago at a store in Valley Stream, New York.

The Occupational Safety & Health Administration cited the company for “inadequate crowd management,” and in May, 2009, said the worker died of asphyxiation after he was knocked to the ground and trampled by a crowd of about 2,000 shoppers who surged into the store for a “Blitz Friday” sale.

OSHA found that the store’s employees “were exposed to being crushed by the crowd due to the store’s failure to implement reasonable and effective crowd management principles.” Employees didn’t receive “the necessary training and tools to safely manage the large crowd of shoppers,” the administration found.

Wal-Mart was fined $7,000, the maximum penalty allowed under the law, OSHA said at the time. Wal-Mart denied any wrongdoing and has appealed the citation to the Occupational Safety and Health Review Commission, an independent federal agency. The commission hasn’t issued a decision on the case.

In recent years, Wal-Mart worked with crowd management experts and devised plans to address how shoppers flow through and out of its stores, Randy Hargrove, a company spokesman, said in an e-mail. Last year, the chain began offering a One-Hour Guarantee that allows shoppers who are inside a store within one hour of a sales event to buy a given item and take it home that day or before Christmas, he said.

This year, Wal-Mart distributed wristbands for its 6 p.m. and 8 p.m. special events on Thanksgiving Day. To prevent a rush, shoppers with wristbands were allowed return two hours after an event starts to pick up their purchases.

Best Buy Co., which held dress rehearsals for its staff last week, has revived a Black Friday ticketing system, said Jeff Shelman, a spokesman. Staff members go to the waiting line well in advance of the doors opening and hand out tickets equal to the number of doorbuster items it is selling. Shoppers can ask for tickets for as many different doorbusters as they want, and can purchase a maximum of one of each category. They are given plenty of time to pick up their items.

“That prevents the need for a big rush to get to the pile of TVs or whatever the hot item is,” Shelman said.

At Target, security staff are riding Segways in the parking lots to increase their visibility, said Jessica Stevens, a spokeswoman. Hanging signs will direct shoppers to hot items spread throughout the store to ensure they’re plenty of room to shop, she said.

Taubman Centers Inc.’s Dolphin Mall in Miami is upping to 24 from 22 the number of uniformed off-duty cops he is hiring to manage the crowd outside and at the entrances, said Pete Marrero, the general manager.

“They have conversations with the customers, they tell them we expect them to come in an orderly fashion when the doors open,” Marrero said.

Last year, Marrero opened an hour earlier than planned when he saw a mob swelling.

“I saw the crowds were getting bigger,” Marrero said. “We opened the doors early to avoid people trampling.”

The local police department in Bloomington, Minnesota, location of Mall of America, one of the nation’s largest, puts extra officers on duty during peak holiday shopping hours, said Vic Poyer, a deputy chief. Today, about a dozen will direct traffic outside, paid for by the shopping center.

“The mall knows they’ve got to get people in and out,” he said. “If they have a bad experience, they won’t come back.”