From texting and talking on cell phones to eating while driving, researchers say distracted driving is a serious public health threat. Though motor vehicle deaths have been declining nationally, a recent study by researchers at the University of Nebraska Medical Center found that deaths in pedestrians and cyclists are increasing.

“We’re constantly exposed to distracted drivers. I don’t think there’s a day that I don’t see someone driving and using their cell phone, a lot of times they’re texting,” said Fernando Wilson, Ph.D., associate professor, UNMC College of Public Health. “It’s something that’s pervasive in society. That’s one of the reasons it’s so difficult to deal with.

“It’s not like seatbelt usage and securing your child into a safety seat. If you don’t do these things, which now are the social norm – it’s viewed negatively. The laws are stricter. With cell phones, we don’t have that social stigma. Not to mention that distracted driving is more difficult to enforce than other driving safety laws.”

The report, published in Public Health Reports November-December issue, documents trends and characteristics of pedestrians, bicyclists and other victim deaths caused by distracted drivers on U.S. public roads. The report does not document injuries.

“The evidence on policies curbing distracted driving is very mixed and some research suggests policies are just not working – that we’re not really making a dent on distracted driving,” he said. “If that’s the case, we need to think about marked crosswalks, bike paths – the environment that tries to create a separation between pedestrians and bicyclists with traffic.”

Researchers used data from the Fatality Analysis Reporting System on crashes on public roads in the U.S. The National Highway Traffic Safety Administration identifies distracted driving based on whether police investigators determined that a driver had been using a technological device, onboard navigation system, computer, fax machine, two-way radio, or head-up display, or had been engaged in inattentive or careless activities. 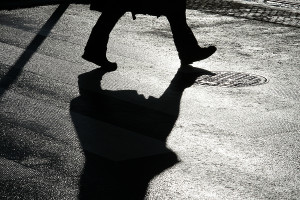 Dr. Wilson said the study also found that 65 percent of pedestrian victims of distracted driving crashes were male between the ages of 25 and 64 years old and Caucasian. The victims also were more likely to be struck outside of a marked crosswalk and be in a city.

Bicycling victims were mostly male — 83 percent, between the ages of 25 to 64 years old and Caucasian.

About half of pedestrian and cyclist fatalities from distracted driving occurred during daytime hours.

“People have to be aware that this problem is not going away anytime soon,” Dr. Wilson said. “So when you’re crossing the street or cycling, you need to be cognizant about this new threat to roadway safety.”