Thin paper sky lanterns, lit from inside by candles that send them floating aloft, have been popular for centuries at Asian festivals, but U.S. fire officials want them banned. 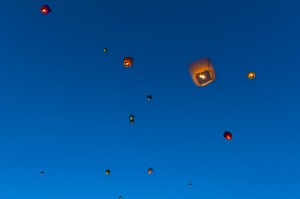 Lanterns have ended up in trees and on tents at New Hampshire Motor Speedway, which draws tens of thousands of fans to two NASCAR races each year, he said. A fire blamed on a sky lantern at a plastic recycling plant in Britain in July caused $9 million in damage.

“You have no control over where it lands,” he said.

A sky lantern is essentially a small hot air balloon made of paper with an opening at the bottom where a small fire is suspended. Invented in China, the lanterns were first used as signals during wars. They are launched at Asian festivals for good luck and to send wishes skyward.

They also are popular at weddings and remembrance ceremonies. Last year, sky lanterns were released into the night sky over Dover High School’s football field in memory of a New Hampshire combat veteran who died in a North Carolina motorcycle crash.

Rob Laughton, part owner of an online retailer selling the lanterns, argues they should be regulated, not banned. He says his Dallas-based company, Wish Lanterns, has been responsive to the public and recently substituted bamboo for wire in the frame to make the lanterns biodegradable and no threat to animals who might try to eat them after they fall. The lanterns come with instructions on how to safely release them and customers are advised to use common sense, such as to not release them within five miles of an airport or in a wooded area, he said.

“The lantern can only come down once the wick has gone out,” he said. “The lantern will come back without any burning parts.”

But Degnan and other fire marshals around the country don’t believe their safety can be guaranteed.

In August, the U.S. fire marshals association adopted a resolution urging states to ban the sale and use of sky lanterns. At least two dozen states and many local jurisdictions have either banned them by law or by regulation, according to Degnan.

State Sen. Nancy Stiles filed a bill to add New Hampshire to the list of states with sales bans.

In December, Degnan used his authority to ban the lanterns’ release in New Hampshire under a code governing recreational fires, but he wants to block their sale as well. His order allows people to light the lanterns if they are tethered, but he fears the lanterns could break loose or that the requirement will be ignored.

“Even if you tell (people) to tether them, will they?” he said.

Stiles, a Hampton Republican, filed her bill at the request of Rye Fire Chief Skip Sullivan. Sullivan said people have lit the lanterns at the beach thinking they would float out to sea only to have them blow inland. One landed in a selectman’s yard, but burned out and did no damage, he said.

Sullivan said fire officials want a law “primarily for the fact that when you light these and send them off, it is an open fire you’re sending off.”

He added, “When these things come down, are these people going to clean up the mess they leave behind?”