A sedated woman lay in an Emory University Hospital intensive care bed, surrounded by machines and monitors – including a ventilator, feeding tube and six intravenous solution pumps. Each machine poured out data on treatment and vital signs.

It was a lot to keep track of – perhaps too much. Nurses and doctors caring for multiple patients struggle to keep up with every beep and alarm, let alone stop and think about how all the readings may add up.

“If you were to ask me, ‘What’s been going on with this patient for the last minute? The last five minutes? The last 30 minutes?’ I couldn’t tell you. There’s so much data going by,” said Dr. Tim Buchman, director of the Emory Center for Critical Care.

Buchman and some like-minded doctors elsewhere in North America are trying to change that.

They use new computer hardware and software to draw all those readings into one coherent picture. They hope such a picture may one day allow doctors to not only get a clearer understanding of how each patients is doing, but also see – and prevent – conditions that lead to strokes or heart attacks.

Some say projects such as the one at Emory University Hospital demonstrate that predictive medicine is becoming a reality. Others caution: Not so fast.

“I would say it has the potential to become a reality,” said Dr. William Hersh, chairman of Oregon Health & Science University’s Department of Medical Informatics & Clinical Epidemiology.

The era of predictive medicine will be here when doctors can show that not only are they able to predict a patient’s health problems but also head them off, he said.

Buchman’s work involves prototype technology. He acknowledges his work is in its early stages, and he’s at least two years away from even starting a study that would compare how well patients do under the new monitoring to patients with more conventional care.

The project falls into a big data movement in health care, with companies trying to make better use of the vast amounts of information in medical records, hospital monitors and other sources.

Some of the work is as concerned with cleaning up hazards as pushing medicine into the future. The Joint Commission – a hospital accrediting group – recently issued a warning about “alarm fatigue,” in which medical monitor alarms go off so often that they’ve become background noise to critical care workers. Alarm fatigue was a factor in at least 80 deaths in U.S. hospitals over 3 1/2 years, according to a commission review. 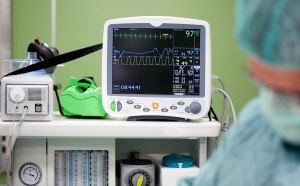 In June, the organization announced it will begin to require hospitals to have policies to prioritize and manage all alarms.

It pairs with IBM Corp. software called InfoSphere Streams that can easily analyze more than 1,000 data points per patient per second.

Recently in an Emory Hospital ICU, Buchman showed how some of the data was combined into a series of red and green dots on a graph on a computer screen. He noted that dots arrayed in certain patterns could, for example, provide a clear early signal of atrial fibrillation, an abnormal heart rhythm that can be caused by insufficient blood oxygen, drug interactions or other factors.

Atrial fibrillations can lead to strokes. If doctors can prevent them from becoming sustained, they might prevent strokes, Buchman said.

The Emory project started in 2010, and the IBM software was installed about nine months ago. It has involved about $250,000 and a few personnel, focused on heart and lung data.

It’s one of several such ongoing efforts, including:

-In Toronto, doctors at The Hospital for Sick Children are trying to spot early signs of hospital-acquired infections in neonatal intensive care patients.

-In New York City, researchers at Columbia University are looking into whether they can detect early signs of ischemia, a life-threatening condition, in stroke patients.

-In Los Angeles, doctors at Ronald Reagan UCLA Medical Center use the IBM software to try to predict dangerous changes in brain pressure in patients with traumatic brain injuries.