Tesla Motors Inc. fell as much as 3.8 percent after the top U.S. auto regulator said the agency is studying an Oct. 1 fire involving one of the plug-in electric carmaker’s Model S sedans.

“We have our experts that are in contact with Tesla right now,” National Highway Traffic Safety Administrator David Strickland told reporters today in Washington. 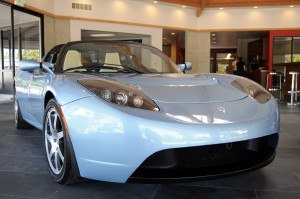 The agency didn’t initially investigate the fire because most of its employees were on furlough during the partial U.S. government shutdown. It previously investigated fires in two other battery-powered vehicles, General Motors Co.’s Chevrolet Volt and Fisker Automotive Inc.’s Karma.

NHTSA is “gathering data” on the Tesla accident and hasn’t decided whether to open a formal investigation, Strickland said.

The battery in the Model S caught fire Oct. 1 after the vehicle collided with a large metallic object on a road in Kent, Washington.

Regulators’ probe of a fire in a Volt, which broke out weeks after the completion of government crash tests, led to congressional hearings.