Toyota Motor Corp. opted against marketing its brake-override system as “Safe Stop” to avoid promising more than the mechanism could deliver for driver safety, the company’s top U.S. executive told a California jury.

Toyota’s chief executive officer for North America, James Lentz, testified today in a lawsuit filed by relatives of a woman whose Camry sped out of control and hit a tree after she was hit by another vehicle in August 2009. The plaintiffs contend, and Toyota denies, that the crash could have been avoided if her car had been equipped with brake override. 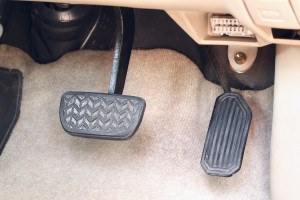 Lentz was asked by a lawyer for the plaintiffs why the company chose “Smart Stop” instead of “Safe Stop” as a marketing phrase to describe an override system that automatically reduces engine power when the brake pedal and the accelerator pedal are applied simultaneously under certain driving conditions. Internal documents show “Safe Stop” was a contender for the name, lawyer Garo Mardirossian said.

“I made clear to the marketing department that it had to be something that didn’t overpromise,” Lentz said. “Safe Stop or Sure Stop was overpromising because it wouldn’t necessarily stop the acceleration in all cases.”

The case at trial is the first of about 85 personal-injury and wrongful-death lawsuits consolidated in Los Angeles Superior Court. Toyota, based in Toyota City, Japan, settled economic- loss claims by U.S. drivers after recalling more than 10 million cars worldwide in 2009 and 2010, in a settlement lawyers for drivers valued at $1.63 billion.

That recall followed complaints of sudden, unintended acceleration, including stuck accelerator pedals and floor mats that would shift position and get wedged under the gas pedal.

Mardirossian has argued that Toyota installed the brake override software in several European models in the early 2000s, including the best-selling Corolla and other compact models, and could easily and cheaply have installed it in the U.S. models, including the higher-priced Camry that Uno purchased in October 2005.

Lentz, who is head of Toyota’s North American operations, said today that he was only aware of one model in Europe which offered the brake override system.

Toyota last week lost a bid to keep Lentz from taking the witness stand. The company argued that previously made video depositions of Lentz should suffice.

California Superior Court Judge Lee Smalley Edmon ruled that the video recording was for pretrial evidence-sharing “purposes only” and that “there’s no question there is a difference ‘‘between playing a video-taped deposition and testimony in person.’’

A physician testifying today as an expert witness acknowledged under cross-examination that Uno was hospitalized twice for vomiting blood and being dizzy and light-headed, including in August 2008, a year before the accident.

Toyota has said Uno’s diabetes and liver conditions impaired her cognitive abilities and caused her to drive down a one-way residential street into oncoming traffic after being hit by another vehicle. The other driver is a co-defendant in the case.