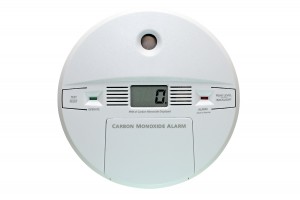 These findings, which underscore the importance of CO alarms in single-family and multi-family homes, are published in today’s edition of the Journal of the American Medical Association. Authors of the study are Neil B. Hampson, MD; James R. Holm, MD; and engineer Todd G. Courtney, of the Virginia Mason Center for Hyperbaric Medicine.

Their research casts doubt on the assumption that the risk for CO poisoning inside a residence is eliminated if there is no apparent internal source of the gas. They determined that carbon monoxide from an external source, such as an electrical generator operating in an adjacent apartment or an automobile engine running in an attached garage, can pass through drywall ceilings and walls because gypsum wallboard is highly porous. CO also penetrates painted drywall, albeit more slowly, the researchers determined.

Their study is believed to be the first to examine the ability of carbon monoxide to diffuse through gypsum wallboard. Gypsum particles contain microscopic pores that are many times larger than CO molecules, allowing these dangerous molecules to easily penetrate drywall.

“There are numerous media reports describing simultaneous CO poisonings in different units of multifamily dwellings,” the authors note. Even though carbon monoxide might have traveled through ventilation ducts, hallways, elevator shafts or stairways in some cases, this was not possible in every case due to configurations of the buildings, they add. This raised the question whether CO could pass through drywall.

Many states are enacting legislation mandating residential CO alarms, although some have exempted structures if there is no apparent indoor carbon monoxide source (i.e., fuel-burning appliances, fireplaces, etc.). This action is dangerous, authors of the study caution, because occupants of multifamily dwellings, for example, can bring sources of CO production into their units and put themselves and people in neighboring units in harm’s way.