The latest report on boat thefts by the National Insurance Crime Bureau (NICB) indicates there were 5,870 watercraft thefts reported during the period of January, 1 and December 31, 2012. That’s a 3 percent decrease from the 6,070 thefts reported in 2011.

The report draws from data contained in the National Crime Information Center (NCIC) database for all 50 states and the District of Columbia. 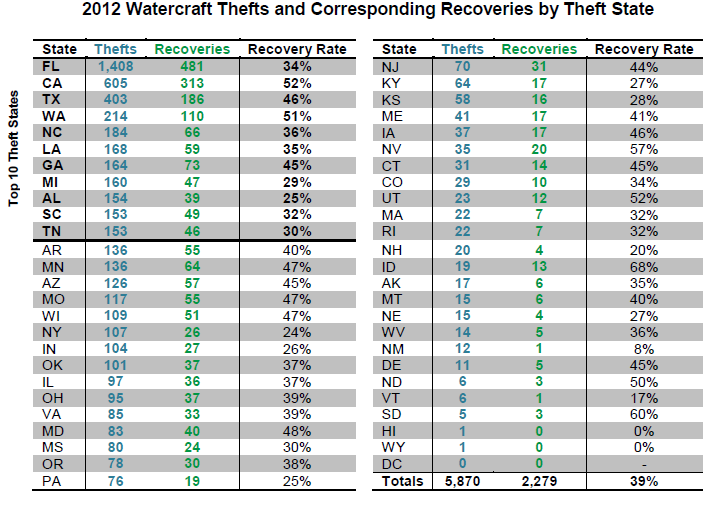 The top five states for thefts were identical in rank order to the previous report. Florida led with 1,408 thefts followed by, in descending order, California (605), Texas (403), Washington (214) and North Carolina (184). Hawaii and Wyoming each reported one theft while the District of Columbia had none.

Also repeating in identical order were the top-five boat types for theft. In first place was the “Jet Ski” category, which recorded 1,373 thefts. It was followed by, in descending order, runabout (937), utility (360), cruiser (251) and sailboat (42).

On average, there were 16 watercraft thefts per day, 112 per week, or 489 per month in 2012. But the most theft activity occurs, as expected, during the spring and summer months. July saw the highest number of reported thefts (739) and February had the fewest (273). Most thefts were reported on Fridays (932) with the fewest being reported on Thursdays (764).