Chemical shippers failed to show any business harm from a regulation requiring railroads to deploy new train-safety technology, a U.S. appeals court said, throwing out a lawsuit challenging the 2012 rule.

The Arlington, Va.-based Chlorine Institute argued that the Federal Railroad Administration rule governing the use of collision-avoidance technology would constrain or eliminate chemical makers’ ability to ship products by rail. Dangerous chemicals will be allowed to move only on lines outfitted with the equipment, shrinking the size of the shippers’ rail network. 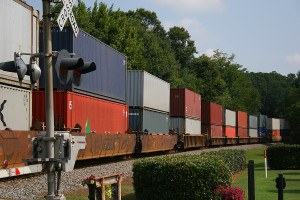 The Chlorine Institute didn’t argue “that any carrier has diminished — or is about to diminish — any individual member’s shipping ability — only that it could do so,” Judge Karen LeCraft Henderson wrote for a three-judge panel of the U.S. Court of Appeals in Washington. The “impact is — at most — speculative.”

The rule gives railroads like Warren Buffett’s Burlington Northern Santa Fe and Union Pacific Corp., the largest U.S. railroad, more leeway than an earlier version in deciding which sections of track will get collision-avoidance technology, according to the decision. Railroads could save as much as $1 billion over 20 years under the relaxed mandate.

The latitude for railroads was part of an effort by President Barack Obama’s administration to pare regulation at 30 federal agencies and save businesses and individuals compliance costs.

“In the Chlorine Institute’s view, today’s decision affirms the right of shippers to move products safely,” Frank Reiner, president of the group, said in an e-mailed statement. “The case was dismissed solely because no shipper has yet been harmed.”

The institute represents chemical shippers and manufacturers such as Olin Corp. and Dupont Co.

The technology, called a positive train control system, was mandated by a law passed in 2008, after a head-on crash in Los Angeles between a Union Pacific freight train and a Metrolink commuter train killed 25 people.

Trains that carry chlorine and other materials that are toxic when inhaled are limited to tracks covered by the technology. The rule sets an installation deadline of Dec. 31, 2015, for railroads operating in the U.S.

The FRA acknowledged that the new rule will result in a smaller network of rail lines using positive train control systems than the earlier version of the regulation, causing more re-routing of traffic, according to Henderson’s decision.

Re-routing “does not necessarily ‘severely limit’ or “eliminate” a chlorine shipper’s ability to ship its product by rail — it simply requires a different shipping route be used,” Henderson wrote.

As the safety technology is installed and its impact becomes clearer, harm may become evident “and the institute’s challenge may thereby ripen,” Henderson wrote. “It is not ripe now.”

The case is Chlorine Institute Inc. v. Federal Railroad Administration, 12-1298, U.S. Court of Appeals for the District of Columbia (Washington).