In the wind-swept prairie called Tornado Alley, the scene is eerily familiar: Homes smashed to splinters. Trees and telephone poles snapped like twigs. Piles of bricks, overturned cars and dazed survivors sifting through rubble in search of a precious photo or heirloom. A town in ruins. 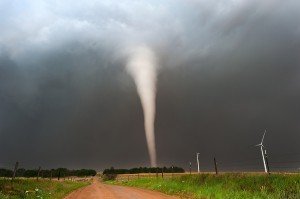 On Monday, it was Moore, Okla. Two years ago, it was Joplin, Mo. There’s a pattern to the aftermath of these deadly disasters: Clean-up. A steely determination. Vows to rebuild. And urgent questions about what can be done to shield tornado-prone communities from the worst ravages of the next monster storm that comes calling.

The ferocious tornado in Moore that killed 24 people and carved a nearly 17-mile path of destruction is bound to revive talk of beefed-up building codes, spur new construction of shelters and send architects and engineers back to the drawing board for ways to make Tornado Alley safer. Some experts are urging more of the tools used to protect hurricane zones; others say there are limits, financial and practical, to what a community can do to protect itself from the kind of horrific super-twisters that leveled Moore and Joplin.

“You can design for 250 mph winds but you can’t design for it economically,” says Steve Cope, Joplin’s building and neighborhood improvement supervisor. “It’s got to be something that can withstand the impact of a car going 250 miles an hour into a wall and roof because that’s what happened here. … To build a truly tornado-proof home, people wouldn’t be able to afford to live in it.”

After 161 people died in Joplin in an EF-5 tornado in May 2011, the city strengthened its building codes. It now requires, for example, more mechanical fasteners at the roof and foundation to better keep intact the shell of the house, Cope says. “We did what we felt was economical and easily achievable and we know would make an impact,” he adds.

But Joplin stopped short of mandating safe rooms, largely for financial reasons. “We’re talking about an additional $3,000 to $4,000,” Cope says. “Many people thought that additional cost should be up to them to decide. We have folks who don’t want government to tell them they had to do it.”

Residents of Tornado Alley have proven time and again their resilience when their communities are flattened and all seems lost. There’s a sense that if dust storms, droughts and Depression have been unable to break their spirit, neither will twisters. That’s especially true in Moore, which has been battered by three big tornados in the last 14 years.

When twister season arrives in Oklahoma, there’s a sense that “this is the time of year when things happen, but it’s not a cowering attitude, it’s not, ‘I’m so afraid,”‘ says Caleb Lack, an assistant psychology professor at the University of Central Oklahoma who has studied PTSD in tornado survivors. One conclusion of his research: PTSD is more likely to occur among those who’ve experienced man-made disasters, such as a bombing or a school shooting, than among survivors of natural disasters.

Folks in Oklahoma understand no place is safe, he says. “You adopt an attitude that matches the environment,” Lack explains. “Here we have massive storms but the positive vastly outweighs the negative. People say, ‘I could live in places where there are no tornadoes’ but then there are hurricanes, there are earthquakes and there are blizzards. You have to choose your poison.”

Joplin hasn’t seen any great exodus since its disaster. There also haven’t been dramatic differences in construction and the same kinds of houses are being built with relatively minor modifications, such as extra concrete in the foundations and roof fasteners, says Crystal Harrington, head of the Home Builders Association of Southwest Missouri.

“That will make a difference for a normal disaster,” she says. “Ours was an extraordinary disaster.”

Harrington says there might have more calls for different construction methods if the twister had been less severe and some particular kinds of building remained standing. But “when you saw all this destruction, all anybody could think was nobody could survive this,” she says. “A concrete house would but people don’t want that.”

Instead, more people are opting for in-house safe rooms or shelters.

That’s the route Lloyd Parker and his wife, Janie, took after they lost almost everything in the Joplin twister. Parker says his wife, who suffered a punctured lung and three broken ribs in the storm, insisted on the safe room. It has 8-inch-thick concrete walls with reinforced steel rods and a steel door that can withstand almost 300 mph winds.

“Short of an atom bomb,” he says, “nothing will get into it. The whole house could fall down and we’re going to be fine.”

They equipped the room with cable TV and recliners. Parker and his wife hunkered down there during a spare of recent storms and stayed informed by watching The Weather Channel.

But they’re still in the minority. Only about 20 percent of homes built after the tornado have above-ground, in-house safe rooms, says Cope, the Joplin official. Some folks, he says, are choosing backyard shelters, instead.

Money remains a big obstacle for building storm shelters and basements, according to Curtis McCarty, an Oklahoma custom builder. Homes in the state are generally built on slabs.

McCarty expects there will be increased demand for shelters now as the Moore tornado dominates headlines, but as the news fades, that might change. “When people cut from their costs, usually that’s the first thing to go,” he says.

In Moore, Mayor Glenn Lewis wants to propose a city ordinance to require all new homes have storm shelters but because of the expense, he says it’s more realistic any requirement will be limited to new assisted-living facilities and apartment complexes.

But shelters are just one option. Engineering experts say residents of Tornado Alley can fortify their homes for a relatively modest price by using construction designs common in hurricane zones.

“The tornadoes that get a lot of press – Moore or Joplin – the sheer destruction is so severe there’s a feeling there’s nothing you can do about it,” says Fred Haan, an engineering professor at the Rose-Human Institute of Technology in Indiana. But, he says, about 90 percent of storms are in the EF-2 category or lower – they carry a maximum 135 mph wind gusts. For those, “raising the level of construction, a lot of the destruction can be significantly reduced,” he says.

Some of the more common items used are `hurricane clips,’ steel fasteners that connect the roof to walls and walls to the foundation. They cost a few dollars each and a couple hundred of them greatly increase the resilience of the house and can double the strength of the roof, he says.

Other possible tools include ring shank nails that also can reinforce the roof, windows that are resistant to debris and reinforced house and garage doors.

For schools and hospitals, more dramatic measures have been taken. In Joplin, St. John’s Regional Medical Center, which was ravaged by the storm, is being rebuilt with siding made of precast, reinforced concrete atop another layer of reinforced masonry. The windows will be made of safety laminated glass capable of withstanding winds of up to 250 mph in the most vulnerable areas, such as intensive care units, according to officials.

Joplin may be able to provide some lessons as Moore recovers. While city officials in the Oklahoma town face many decisions Jennifer Walker already has made up her mind.

When she moved into her single-story brick house in Moore eight years ago, she considered installing a safe room or bunker to shield her family. She decided against it.

This week as she stood in the rubble and watched two National Guardsmen dig through the wreckage of her home to retrieve her two-week-old washer and dryer, she made a vow: She’ll build an underground bunker, even if she has to shell out $10,000.

“Oh yeah, I would forego the granite, whirlpool tub,” she says. “I would forego all that just to have the shelter, for sure. Now.”