Difficult to access and usually within confined spaces yacht fires can grow into big losses quickly, posing challenges to both firefighters and insurers.

An insurer that specializes in insuring the ultra‑high net worth segment like high‑end homes, autos, collections, airplanes and yachts, AIG insures more than 200 80-plus foot yachts worldwide, including mega‑yachts larger than 500 feet worth hundreds of millions of dollars.

“Yacht fires have both a severity issue for us, in terms of the values of the yachts that we insure, and we also have concerns with aggregation,” Blue said.

The company teamed up with Resolve Maritime Academy, a company that specializes in training shipboard firefighting for cruise lines, container ships and bulk carriers around the world, and Rybovich Yacht Yard in West Palm Beach to conduct the program.

The three day program was unique in that it focused on fighting fires in marinas, boat basins, yacht yards and onboard yachts. Led by retired U.S. Navy Firefighter Tom Jones, the training included both classroom instruction and a fire simulation exercise.

The Rybovich Yacht Yard is one of the larger megayacht and superyacht yards in the U.S. The firefighters toured several yachts led by captains, engineers and first officers so that they could get a true sense of what they would face in the event of a fire, said Carl Lessard, yacht loss prevention specialist for AIG. 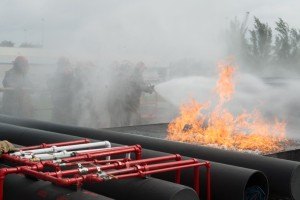 The training was held because yacht fires at marinas and boatyards are typically fought by firefighters using land-based techniques, trained only to fight building fires.

“The boat came into the dock on fire. It was really difficult to access the boat, to get equipment down the dock. It was just kind of a challenge from start to finish. By the time that thing hit the dock, it was already decided. Apparently, they had trouble at sea and made it into the intercoastal and up to the dock. But by the time they actually tied up, I think the fire was probably going to the point that it was going to be difficult, if not impossible, to save the boat at that time,” Lauth said.

Yacht fires have unique characteristics with a tendency to rapidly spread to adjacent vessels in high concentration facilities. There are inherent problems fighting yacht fires with water, so specialized techniques are required. A sinking yacht could also cause potentially higher losses and pollution-related expenses. 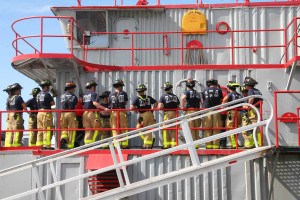 The firefighters also learned about foam application, rapid response, search and rescue, pollution mitigation, and the removal of adjacent vessels.

According to Carl Lessard, one difference between fighting a structure fire and a ship fire is the extremely confined spaces. He said that creates a limited ability to exhaust heat and smoke which could cause the fire to spread rapidly.

The confined space creates issues with communication, another problem in fighting onboard ship fires.

“They’re quite a bit smaller than a full‑sized cargo ship. Therefore, access to below decks areas is generally a little more difficult. There’s a lot of a really tight space, even on a 100, or 150 foot yacht,” Lauth said.

Another issue is pollution, the result of some larger yachts having jet fuel onboard for helicopters. Megayachts may carry as much as 80,000 gallons of fuel.

“You can get a tremendous amount of collateral damage because of the amount of fuel that some of these yachts will carry onboard,” Lessard said.

One of the differences between a building fire and a yacht fire is that a building is unlikely to sink whereas a yacht could.

“Once you lose stability of the vessel, meaning if it sinks, then you have a very high likelihood that you’re going to have pollution problems,” Lessard said.

He said a key to pollution mitigation is to try and save the vessel from sinking so that all of the fuel is contained within its own tanks.

The risk of damaging neighboring vessels is also a concern. In tight marinas it is not uncommon for fires to spread to other boats.

“Another issue is that a yacht fire may start off as a Class A, which would be wood or paper or anything that would create ash, or Class C, which is electrical, typically a major cause of yacht fires. They end up being a multiple‑class fire because of the chemicals and the fuels onboard, so they burn very hot,” Lessard said.

Going below deck is another safety issue for firefighters.

“Most buildings that are above grade, you can attack from different levels, you can attack a building fire from outside by sticking a nozzle in the window. You can access a building from the unburned side. You have options, but when you’re going below grade, you’re kind of limited in how you get to where the fire is. That creates a problem in and of itself,” Lauth said.

According to Lessard, foam retardant and thermal imaging devices are helpful when fighting boat fires.

“Thermal imaging devices – that’s a critical tool to be able to locate a fire, particularly if the fire begins in the void of a vessel. A lot of the electricity and panels and wiring are behind the decorative walls within the vessel. Between the decorative walls and the superstructure can be void spaces, and that’s typically where the electrical services are run. You might have heat and smoke, but you may not see the flames, so the thermal imaging helps the firefighters and also yacht crews to be able to locate the fire,” Lessard said.

And though water is a helpful cooling agent, the experts said it does little to put a blanket between the liquid and the source of ignition. Foam is what’s needed to separate the two.

“You want to separate or seal them from heat, you want to stop them from off gassing, because that’s what burns,” the battalion chief said.

The liquid gets heated to the point of vaporization, and the vapors ignite.

Foam tends to be in limited supply because it’s used primarily on car fires so the quantity that fire engines carry is relatively small, he said.

Though airports have crash trucks that contain thousands of gallons of foam, accessibility limitations means they’re rarely seen at a yacht fire.

“You can’t get a crash truck down a dock,” said Lauth. 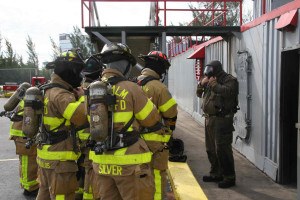 Whilelarger boats may have suppression systems, they don’t have firefighting materials, like foam, on hand for firefighters to use.

Even if foam is in ready supply, the way it is dispensed matters. The length of the hose has considerable effect on foam consistency.

“When you have a several hundred foot dock, then you have a problem, not only getting the foam down there, but being able to put the foam into the hose line at such a point that when it comes out, it’s doing what it was designed to do,” Lauth explained. “If you have a limited amount of foam and you are applying foam with regular water, the water basically dilutes and washes the foam away. The bottom line is, if you don’t have enough foam to finish the job, you’re probably wasting your time.”

According to Lauth, the three primary things that firefighters attempt to address when fighting a fire is to remove heat, fuel and air.

“In other words, you seal the engine compartment and you activate the suppression system, it smothers the fire,” said Lauth. “Then you wait for it to cool. Firemen being firemen want to open things up, to see what’s going on. Because in a building fire, if you had a fire burning in a small space and you ignored it, obviously it would spread to other parts of the building.”

Directions given to ships’ crews in the event of a fire need to be heeded by firefighters.

“The suppression system may actually be working and doing what it’s designed to do because the space is sealed, there’s limited oxygen, and things are cooling down. But firemen come and they open the door because they want to make sure the fire’s out, and by opening the door, they reintroduce air and the process starts all over again,” Lauth said.