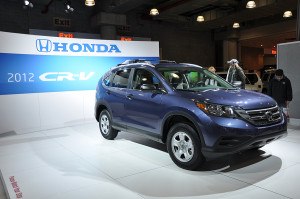 Subaru’s 2014 Forester was the only vehicle to get a “good” rating. The 2013 Mitsubishi Outlander Sport received an “acceptable” rating. But top-selling models such as the Ford Escape, Honda CR-V and Jeep Wrangler received only “marginal” or “poor” ratings from the Insurance Institute for Highway Safety.

The ratings, released Thursday, are for the institute’s new “small overlap” crash test that covers only 25 percent of a vehicle’s front end.

The group’s tests are more stringent than the U.S. government’s full-width front crash test. The institute says that in many vehicles, a crash affecting one-quarter of the front end misses the main structures designed to absorb the impact of a crash. Yet such crashes account for nearly a quarter of the collisions that cause serious or fatal injuries to people in the front seats.