Claims fraud is pervasive in insurance. Large or small, insurers have measures in place to detect and investigate fraudulent claims and mitigate losses. The sophistication of these fraud prevention operations vary across carriers and lines of business. They range from manual referrals made by claims adjusters based on gut-feeling or flags, to automated detection engines that leverage business rules, outlier analysis and predictive analytics to send real-time alerts to handlers and special investigation units. 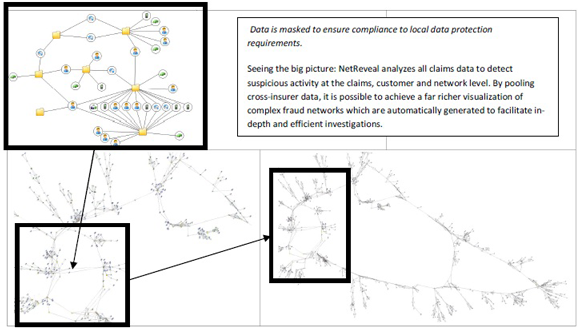 The old adage ‘follow the money’ aptly describes the investigation process. Fraud can be committed by a broad range of players including the claimants and supporting entities such as attorneys, auto repair shops, and healthcare providers. Sophistication can range from the opportunistic cases, for example exaggeration of losses after a house fire, to the pre-meditated cases, organized by criminal groups that set up complex cross-insurer schemes designed to purposefully avoid traditional detection systems and maximize payouts. The sophistication and intention of these schemes drives the complexity of analytics needed for detection, and when it comes to organized crime, connecting all the dots requires an understanding of the big picture.

But with the information insurers have today, how can they see this bigger picture? The simplest solution is to pool in-depth cross-insurer data in a single repository for fraud detection analysis. There are challenges to this approach, not the least of which is a regulatory and ethical duty to protect customers’ personal information and an insurer’s competitive edge. However, the good news is that American insurers are not the first to tackle this type of rich data sharing, or consortium, initiative. In fact, these initiatives have already been implemented in the US in the banking industry, and by other insurers across the globe, showing how such models can complement existing single-insurer detection capabilities. And even within America, initiatives to share elements of claims data nationally have been established by commercial organizations, with national not-for-profit fraud prevention bureaus and certain state fraud bureaus successfully instituting analytical fraud detection divisions.

Within the banking industry, consortiums have been traditionally set up as a third party entity. In the US, specialized units within the consortiums vet alerts that are generated automatically using analytical methods, and send relevant information to member banks to investigate activities such as money laundering, terrorism, and first party fraud. In these cases, the operational setup of the third party entity allows for data sharing under such regulations as the USA Patriot Act and the Fair Credit Reporting Act (FCRA). For similar reasons, several global property/casualty insurance consortiums are structured as third party governed entities. In other cases, two or more companies may form direct partnerships to share data for the purposes of preventing fraud.

In both the banking and insurance industries, BAE Systems Detica has played a role in automated detection using NetReveal to uncover hidden relationships within a client’s data using techniques of advanced social network analysis. In both the banking and insurance industries, there is an inherent need for the ability to ingest disparate sources of data while finding and linking together people, devices, businesses, property and transactions found within it. The volumes of the data ingested speak to the underlying intelligence that can be harnessed: in banking, over 600 million accounts are processed. For insurance, 98 percent of auto claims in the UK and associated policies are aggregated into a consortium model.

The impacts of analytics on this data have been dramatic. Up to 90 percent of fraudulent claims found in consortium models are not found using existing detection systems. And for those claims found by single-insurer systems, the consortium model is often able to find these claims earlier, while reserves are higher and payments lower. Within the first two years of operation, one consortium group recouped millions in monetary savings, and facilitated more than 300 arrests.

We believe that the US P&C insurer market is now well-positioned to safeguard hundreds of millions of dollars annually that are currently lost to organized crime by building on the successful foundation that consortium solutions have established in multiple industries across the globe. We believe that using a consortium model is complementary to existing initiatives bringing detection uplift and the means by which insurers can take a step back from the claim level and literally visualize the complex fraud rings that target the industry.

The complexity of the US market creates unique challenges for a consortium model. The market has many smaller, regionally focused insurers that have limited nationwide market share. Limited market share in turn often means sparse, and at times poor quality, claims data within any one region. However, to properly equip insurers with a sufficiently rich pool of information, we believe the best approach is to initially focus regionally and bring together insurers who write their business in similar geographical areas for regional consortium models.

BAE Systems Detica thinks regional consortiums with in-depth data and analytics can provide additional uplift to existing cross-insurer fraud detection initiatives in the US. Uplift would be achieved through enriching the data fed through the analytics, the provision of user friendly investigative tools that present a consolidated display of salient information, clear textual descriptions of suspect indicators and automated visualization of the suspect interconnections in shared data.

In the early stages of developing consortium solutions, we recommend insurers concentrate on specific suspect behavior of high importance to the region. This approach allows insurers to systematically target fraud modus operandi, rather than creating an overly broad solution. It also allows for detection analytics that are targeted to fraud problems in specific regions or states. Additionally, NetReveal gives insurers the information ownership and investigative tools needed to respond and adapt quickly to emerging situations, such as fraud schemes that take advantage of infrequent catastrophic instances or natural disasters.

A modular approach to adding lines of business to a consortium solution means simpler IT projects, and shorter implementations and roll outs. This means starting with linking data from a single LOB to recognize benefit as early as possible, with a high return on investment to increase impact for insurers.

In the end, the objective of a consortium model is to stop fraudsters, first by identifying the criminals who commit fraud on a regular basis and then by moving this intelligence to the front end to inform risk assessment in underwriting for the instances where the insured person is perpetrating the fraud. Detecting and preventing organized fraud through a regional consortium will mean a better bottom line for insurers, savings that can be passed on to the consumer and used to reinvest in counter fraud initiatives.