Superstorm Sandy didn’t just rattle the East Coast, it also jiggled the ground across the country ever so slightly, scientists reported Thursday.

Earthquake sensors located as far away as the Pacific Northwest detected the storm’s energy as it surged toward the New York metropolitan region last year. The network typically records the sudden release of energy in the Earth’s crust, but it can pick up shaking triggered by ocean waves, mine cave-ins and tornadoes. 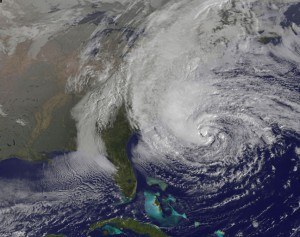 As Sandy lashed at New York City and New Jersey, the force of waves slamming into other waves shook the seafloor, which was recorded by the system of 500 sensors.

The energy generated by Sandy was similar to small earthquakes between magnitudes 2 and 3, seismologists at the University of Utah estimated.

While they did not track Sandy’s strength last October, they went back and analyzed seismic data before and after the storm churned ashore. The findings were presented at a meeting of the Seismological Society of America in Salt Lake City.

Sandy, which started off as a hurricane that later merged with another storm system, caused widespread property damage, swamping homes and businesses along the Jersey shore and parts of New York City.

Sandy wasn’t the first storm to be sensed by quake stations. When Hurricane Katrina took aim at New Orleans in 2005, instruments in California tracked the path of the punishing waves.

Other events also have been captured by seismic sensors in recent years. A deadly coal mine collapse in Utah in 2007 registered as a magnitude-3.9 quake. Earlier this year, a meteor that exploded over Siberia’s Ural Mountains sent rippling shock waves that were detected by ground instruments.