A marathon course runs 42.195 kilometers along an open road. Much tougher to secure than an arena with doors and walls.

Yet around the world, from London this weekend, to Nashville, Tennessee, next week and Copenhagen next month, organizers of road races are trying to figure out how to improve security after the Boston Marathon bombings.

Paris Marathon director Joel Laine, whose race was held earlier this month, put it this way Tuesday: “There will be a ‘before’ and ‘after-Boston”‘ from now on. 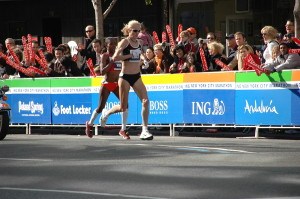 Still, with thousands – and sometimes hundreds of thousands – of spectators and entrants scattered along the route, there are limits to how much can be done to protect everyone, marathon officials, experts and runners cautioned. They spoke in dozens of interviews with the AP a day after a pair of bombs went off seconds apart near the finish line in Boston, killing three people, including an 8-year-old boy, and injuring more than 170 others.

“This is what everyone thought might happen” following the 9/11 attacks, said Tom Derderian, coach of the Greater Boston Track Club and author of a book about the Boston Marathon.

“This is a 26-mile foot race. With both sides of the street, that’s 52 miles to secure,” Derderian said. “How? You can’t have everyone go through metal detectors.”

Marathons aren’t just for elite athletes: They have steadily increased in popularity among recreational runners and those raising money for charity. In the aftermath of Monday’s attack, which President Barack Obama called an act of terrorism, some marathons heard from runners wondering whether races would be canceled. Yet nearly 40 events, all over the globe, are set for this weekend alone – including Hamburg, Belgrade, Salt Lake City, Lansing, Michigan, and the Jersey Shore. There was no indication that any would be called off.

Scott Dickey, CEO of Competitor Group Inc., which manages more than 35 marathons and half marathons around the world, said he’s “been in deep conversations already” with the FBI and government agencies “to talk about enhancing security protocol and personnel” for the St. Jude Country Music Marathon and Half Marathon in Nashville on April 27.

“What we’re going to do with yesterday’s event is we’re going to learn from it, and we’re going to increase, certainly in the near term and probably permanently, the number of security personnel, both private and public, at our start lines and finish lines,” Dickey said. “We’re going to review the protocol and procedures that are in place and enhance and improve them so that we’re in a better position to prevent these types of tragedies from taking place.”

“We’ll make sure we have more security available, that people are more aware and are aware of their surroundings,” Smisek said. “Will it make us more vigilant in what we do? You bet.”

Rick Nealis, director of the Marine Corps Marathon since 1993, pointed to factors that make these races unique among sports – and, therefore, more of a challenge to secure.

“It’s a participatory sport. At any running event, especially Boston, world champion and Olympic athletes stand at the start line, and at the same time, there’s someone from Boise, Idaho, or Duluth, Minn., that did the qualifying time and are in the same field, on the same course, in the same weather as these champions, competing,” Nealis said.

“In stadiums, turnstiles, hardened buildings, you can control who’s going in, and do all the safety checks and have a secure event,” added Nealis, whose race course cuts through Virginia and the nation’s capital, ending near the Iwo Jima Memorial. “On roads, in an open venue, when you take 26.2 miles of open space, it’s the beauty of the sport and at the same time, in this day and age, part of the risk assessment. Unless we decide we’re going to run around a track in quarter-mile loops hundreds of times.”

The New York City Marathon’s finishers grew from nearly 28,000 in 1992 to more than 47,000 in 2011, and organizers estimate they’ve had as many as roughly 2 million spectators in a year. The race was not held in 2012, after Superstorm Sandy hit the area, but Mayor Michael Bloomberg said Tuesday: “It’s certainly our intention to have the marathon” this November.

“A marathon is 26 miles long, so, you know, there are points of vulnerability – by definition, there are going to be,” New York City Police Commissioner Raymond Kelly said, noting the race’s security plans will be reevaluated.

The Honolulu Marathon ranked seventh on that list with just over 24,000.

“You can’t plan to stop everything, but certainly everyone will look at tightening things up, for sure. You have to strike some balances between what is feasible and what is possible and what is necessary,” said Jim Barahal, president of December’s Honolulu race. “It’s going to have effects outside the marathon world, which in reality is a pretty low-profile world. It can happen anywhere, at any time.”

Dorte Vibjerg, organizer of the Copenhagen Marathon, said “the incident in Boston means we will have more focus on security.”

“We can never prevent anything from happening,” she said, “but we can minimize and react fast should anything happen.”

Lefteris Plakidas, a spokesman for the association organizing Sunday’s Alexander the Great Marathon in Thessaloniki, Greece, voiced the thoughts of organizers of various races around the world when responding to a question about whether fail-safe security measures can be implemented: “It is neither possible, nor does it make any sense in Greece. Just think, in our marathon, (half goes) through an industrial area. It’s not possible to secure an area like this.”

“But who could have imagined a terrorist attack at a marathon,” Plakidas added, “a race of mass sport that is open to everyone, from athletes, children, older people, to people with special needs?”

That association’s general secretary, Yiannis Podiotis, said the group spoke to local police after Monday’s bombing, but there are limits to what can be done.

“What can we do, have 10,000 police running behind the runners?” Podiotis asked.

About 2,000 runners are expected for Sunday’s marathon and 5-kilometer and 10-kilometer events there.

Gold Coast Marathon head Cameron Hart, whose race is expected to attract 30,000 runners in July, acknowledged that the attack in Boston raises concerns.

“The very fabric of having the runners go past public areas,” Hart said, “means it’s something that is impossible to lock down.”

Security at the starting area and the finish line are particularly tight, Kazama said, because only registered staff and runners are allowed. Security personnel stand along the course, facing the road, to try to quickly detect anything suspicious.

Lou Marciani, director of the National Center for Spectator Sports Safety and Security at The University of Southern Mississippi, said there has been a lot of progress since 9/11 – especially when working to secure stadiums. But large, public events are especially vulnerable. He said the international flavor of the Boston Marathon could have been a factor in its appeal to the attackers.

Marciani expects tighter security at all major sporting events in the coming months – and, yes, there were increased police at baseball stadiums and NHL arenas by Monday night – but a targeted plan won’t be developed until a full report comes from Boston.

No matter what law enforcement determines about Boston, Marciani expects start and finish lines at marathons to get the heaviest attention.

That’s going to be the case for the 275 or so runners who will participate in the Adrenaline Marathon and other races Sunday in West Bend, Wisconsin, according to organizer Mary Simon. There will be more bag checks there, too. Simon was pleased to see about 20 additional runners register in the aftermath of Boston’s bombing.

“One of the great things about these marathons is that they are free and are available to the public. That’s why we have hundreds and thousands of people come out and watch them. I can’t see how that is going to change. It’s part of the whole ethos of what a mass-participation marathon is about,” said Nick Bitel, chief executive of the London Marathon.

“What one has to do is make appropriate and reasonable security measures in light of the threats,” he added, “and that’s what we’ll be doing on Sunday.”