Toyota, Honda and Nissan are recalling more than 2 million vehicles globally for an identical problem with airbags on the passenger side whose inflator may burst, sending plastic pieces flying.

No injuries have been reported related to the problem.

The recall for air bags made by Japan’s Takata Corp. affects other automakers including non-Japanese manufacturers, and may be as many as 3 million vehicles, Takata spokesman Akiko Watanabe said Thursday. She declined to give details. 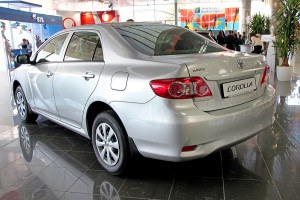 Toyota said it had received five reports of airbag problems, three in the U.S. and two in Japan, but there have been no injuries.

The automaker suffered a blow to its reputation from a series of massive recalls in 2009 and 2010, including faulty braking, sticky gas pedals and defective floor mats, partly a reflection of how various models used the same parts to save costs. But the latest recall is affecting other major automakers as well.

The automakers have reported the problem to the Transport Ministry in Japan, and will be reporting other recalls later in the day in other regions, they said.

The recall extends to Latin America, China, other Asian nations, the Middle East and Africa.

The Yokohama-based automaker said vehicles in North America and Europe are affected, but did not immediately have other details on its 343,000 overseas recalls.

Recalled models in Japan include the Cube, X-Trail, Maxima and Teana, made from August 2000 to January 2004, spokesman Chris Keeffe said.

The problem crept in because of two human errors during production. A worker forgot to turn on the switch for a system weeding out defective products and parts were improperly stored, which exposed them to humidity, according to Honda spokeswoman Akemi Ando.

Also affected under the same recall were the RX-8 and Mazda 6 at Mazda Motor Corp.

The Hiroshima-based automaker said 45,000 vehicles were recalled, including 4,000 in Japan. It did not give numbers for other regions, but said recalls will be announced in North America, Europe, China and other nations.

Takata stock plunged as much as 15 percent before closing down 9 percent. Toyota, Honda, Nissan and Mazda shares rallied in Tokyo, shrugging off the recall.