After four days on a crippled cruise ship with overflowing toilets, stifling heat and hours-long waits for food, at least one passenger from the Carnival Triumph is seeking legal revenge.

But lawyers familiar with cruise ship lawsuits suggest angry passengers should think twice before rushing to the courts. Unless passengers suffered major injuries or other losses due to negligence by the cruise operator, they would be better off accepting compensation from Carnival Corp, they said. 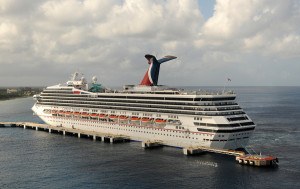 The Carnival Triumph was towed into port in Mobile, Alabama, late on Thursday, giving disembarking passengers an opportunity to speak out about their ordeal.

Within hours, Cassie Terry, of Brazoria County, Texas, filed a lawsuit in federal court in Miami describing the ship as “a floating toilet, a floating Petri dish, a floating hell” and seeking damages from Carnival Corp.

As the ship listed as it was being towed, Terry was in constant fear of contracting serious illness from raw sewage spilling from non-functioning toilets. She had to wade through human feces to reach food lines that were hours long, only to receive spoiled rations, according to the lawsuit.

But Terry’s account and those of other passengers do not describe the type of injuries or harm that could lead to a successful lawsuit, according to attorneys who specialize in suing cruise companies.

Conditions might have been disgusting “but get over it,” said Miriam Lebental, an attorney from San Pedro, California, who specializes in cruise ship injuries.

Like other attorneys that pursue cruise companies, she said she would not be interested in taking a case unless it involved a major injury and negligence, such as a passenger breaking their neck during a fall down an unlit stairwell.

There have been no such reports from the Triumph.

Terry declined to comment. Her attorney, Brenton Allison of Gilman & Allison in Pearland, Texas, said he understood that other attorney’s were skeptical about taking cases from passengers, but his client was nauseated and running a fever.

“I don’t know what may manifest from her exposure to those conditions,” he said, adding that Terry would decline the compensation offered.

Carnival has offered passengers $500, reimbursed their transportation and many onboard costs and given them a credit toward a future cruise equal to the amount they paid for the Triumph vacation.

Jim Walker, a premier lawyer for cruise passengers, said passengers would be wise to take the money.

“It’s more than any attorney could get for them,” said Walker, a partner at Walker & O’Neill in South Miami, Florida.

The cruise industry has become adept at using tickets, which are binding contracts, to limit their liability and define how a passenger can sue the cruise company, the lawyers said.

These tickets are “the most onerous one-sided terms and conditions,” said Walker. “It’s difficult to sue them.”

For example, the tickets for the Costa Concordia, which hit rocks off the coast of Italy in January 2012 and killed 32, required passengers to sue in Italy.

Several cases brought in Miami federal court by Concordia passengers were dismissed for that reason.

In the case of the Triumph, the tickets likely contain similar language that require that lawsuits be brought in federal court in Miami, regardless of where the passenger lives.

The cruise industry has said that such “forum selection” clauses in cruise tickets help keep down costs for cruise operators by corralling all litigation in one court.

“It’s like built-in home court advantage for the Miami Heat,” he added.

Carnival, which is the parent company to both the Triumph and the Concordia, did not immediately respond to a request for comment.

Cruise companies have also been able to limit their liability for accidents that occur during shore excursions or for the negligence of ship staff.

Cruise tickets often state that harm caused during excursions must be brought against the company that provided the activity.

Many staff doctors or masseuses are independent contractors and passengers must sue them, not the cruise line, and staff often do not have insurance and frequently are not Americans.

“If the ship doctor kills you, your family has to chase the doctor in South Africa or the Middle East or India, which is exceedingly difficult, if not impossible,” Walker added.