The rate of tailgate theft claims has been increasing since 2009, with an 18 percent increase projected from 2011 to 2012, according to a new report by the National Insurance Crime Bureau (NICB). 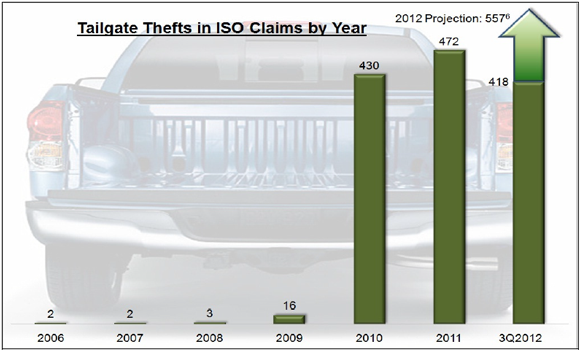 The report examines theft claims submitted to insurance companies during the period from Jan. 1, 2006, through Sept. 30, 2012, of which 1,343 claims were generated from 45 states.

Texas topped the list as the loss state with the most tailgate theft claims—451, or 34 percent of the total. California was No. 2 with 272 claims, followed by Arizona with 125. Florida was fourth with 86 thefts, and Nevada rounds out the top five with 36.

The make and model that saw the most tailgate theft claims during this period was the 2008 Ford F250 with 70 claims, or 5 percent of the total. Next was the 2010 Ford F150 with 48 claims, followed by the 2007 Chevrolet Silverado with 39 claims. The oldest vehicle identified in this report was a 1985 Ford F150. The newest vehicles identified included 2012 models of Chevrolet, Dodge, Ford, GMC and Toyota pickups.

It is important to note that the numbers in this report reflect insurance claims and are not representative of the actual theft activity. Moreover, due to the methodology used to identify tailgate thefts it is possible that some thefts may have been missed. Also, for many reasons tailgate theft victims choose not to submit an insurance claim. Many victims may not be insured against theft while some feel that filing a claim may impact their future premium. Others may have a deductible that is higher than the replacement cost. Law enforcement agencies remain the best potential source of comprehensive tailgate theft activity and even they may not capture all of it.

Tailgates can be stolen in less than 30 seconds, making them prime targets of opportunity. With replacement costs reaching $1,000 or more, it makes sense for pickup owners to make their tailgates less attractive to thieves.