The unrelenting drought gripping key farming states in the U.S. Plains shows no signs of abating, and it will take a deluge of snow or rain to restore critical moisture to farmland before spring planting of new crops, a climate expert said on Thursday.

Precipitation in the Plains region has been 3-6 inches shy of normal levels since October, and some areas are nearly 16 inches short of much-needed moisture over the last nine months, said Svoboda.

The drought that last year ranked as the worst in roughly 50 years is still entrenched in the nation’s mid-section. This month was considered the worst January in terms of drought over the 13 years that a consortium of federal and state climatology experts have been monitoring drought levels and issuing regular “Drought Monitor” reports, said Svoboda.

“The January number is the highest amount of coverage for the U.S. since we’ve been doing this,” Svoboda said.

Nebraska remained the most drought-stricken state, with 96.28 percent in extreme drought – the second-worst level of drought – and 77.46 percent in exceptional drought, considered the most dire. The Plains states are key crop production areas, particularly for hard red winter wheat, an important bread-making crop. And they are critical areas for cattle and other livestock production.

Overall, 57.68 percent of the contiguous United States was in at least “moderate” drought as of Jan. 29, a slightly worse situation than the previous week’s tally of 57.64 percent. Exceptional drought expanded slightly to 6.37 percent, up from 6.36 percent of the country.

Millions of acres from South Dakota to Oklahoma and west into Wyoming, Colorado and New Mexico and east into Missouri and Arkansas, are short more than half of the normal moisture they receive, said Svoboda. The dry conditions have been exacerbated by unseasonably warm conditions in many areas. 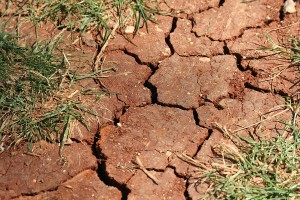 The U.S. winter wheat crop that was planted last fall is struggling for survival now as a result, and will need substantial moisture to emerge in the spring.

Corn and soybeans crops, generally planting in April or shortly after, will also need good soil moisture to get the plants off to a healthy start before summer sets in. But there are no signs of any significant weather pattern shifts to bring about heavy precipitation, said Svoboda.