Dry weather continues to plague the drought-stricken U.S. Plains and western Midwest with only light showers and snowfall expected this week, an agricultural meteorologist said on Monday.

“The Plains and the northwest Midwest will still struggle with drought, there’s not a whole lot of relief seen,” said John Dee, meteorologist for Global Weather Monitoring.

Dee said there would be some light rain in the eastern portions of Kansas, Oklahoma and Texas late Monday and Tuesday, with heavier rainfall seen for the eastern and southeastern Midwest late Tuesday and Wednesday.

“Roughly east of a line from Kansas City to Chicago will receive 0.50 inch to 1.00 inch or more, but they aren’t as affected by the drought at this time,” Dee said.

Commodity Weather Group (CWG) said light showers fell over the weekend across the Central Plains and much of the Midwest and northern Delta. “Scattered amounts of 0.10 to 0.40 inch were noted for drought areas from Nebraska and northern Kansas into southern Minnesota and Iowa,” said CWG meteorologist Joel Widenor.

“While very light showers are also possible in parts of Nebraska, South Dakota and Minnesota tonight and again next week, none of this will be significant enough to put much of a dent in the drought,” he said. 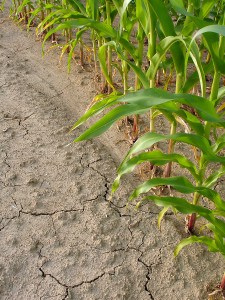 Without rain or heavy snow before spring, millions of acres of wheat could be ruined while corn and soybean seedings could be threatened in the western Midwest, meteorologists and other crop experts have said.

A climatology report issued last Thursday said there were no signs of improvement for Kansas or neighboring farm states.

Roughly 57.64 percent of the contiguous United States was in at least “moderate” drought as of Jan. 22, an improvement from 58.87 percent a week earlier, according to last Thursday’s Drought Monitor report by a consortium of federal and state climatology experts.

But the worst level of drought, dubbed “exceptional,” expanded slightly to 6.36 percent from 6.31 percent of the country.

Officials in north-central Oklahoma this month declared a state of emergency due to record-low reservoir conditions. Public and private interests throughout the central United States were examining measures to cope with the drought.

The government on Jan. 9 declared much of the central and southern U.S. Wheat Belt a natural disaster area.