Accounting for 14 percent of fire department responses, the fires resulted in approximately 300 deaths, 1250 injuries and $1.1 billion in property loss, according to the report, Highway Vehicle Fires (2008-2010), developed by USFA’s National Fire Data Center and based on data from the National Fire Incident Reporting System (NFIRS).

According to the report: 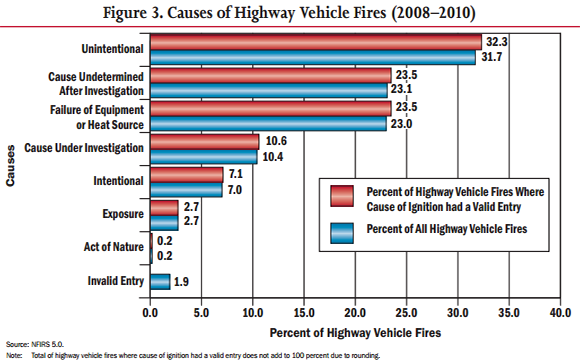 Highway vehicle fires tend to occur in the afternoon and evening hours and there is higher occurrence of fires in summer.

The risks from motor vehicle fires are often overlooked. Toxic gases and other hazardous substances, along with flying debris and explosions, can combine to produce serious dangers.

The report is part of the Topical Fire Report Series. Topical reports explore facets of the United States fire problem as depicted through data collected in NFIRS. Each topical report briefly addresses the nature of the specific fire or fire-related topic, highlights important findings from the data, and may suggest other resources to consider for further information. Also included are recent examples of fire incidents that demonstrate some of the issues addressed in the report or that put the report topic in context.