Subaru is recalling as many as 634,000 vehicles in the United States for potential lighting problems that could lead to smoke or fire, according to U.S. safety regulators. 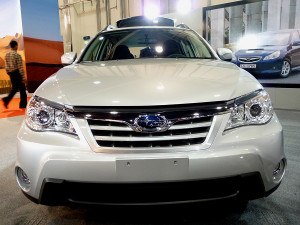 The 633,842 vehicles potentially affected by the recall may be equipped with accessory puddle lights that when lit brighten the areas under the doors, according to NHTSA documents.

A Subaru spokesman said the recall involves only 53,999 cars equipped with the lights, but the wider number of owners must be alerted because the company does not know which cars have them.

There have been no reports of accidents or injuries related to the issue, but there was one report of smoke, the spokesman said.

A short circuit can develop when the light or connector are exposed to an electrolytic moisture source such as road spray that has road salt in it, the NHTSA said. That can cause heat that could melt the plastic, resulting in smoke or fire.

Subaru will notify owners, and dealers will install an additional harness, the NHTSA said. The recall is expected to begin next month.