Over the past 30 years, all-terrain vehicles (ATVs) have grown increasingly popular recreationally and have become a valuable asset at work. With an estimated 11 million in use in 2010 for both work and recreation, ATVs have become a common means of transportation.

ATVs were first manufactured in the late 1960s as farm-to-town vehicles for use in isolated, mountainous areas in Japan. They were first introduced in the U.S. for agricultural applications in the early 1980s. ATVs have many unique features that enable them to operate in a variety of harsh environments where other larger, less mobile vehicles cannot be used, making them very useful in the workplace. Oversized and low pressure (4-5 psi) tires, low weight (600-1000 pounds) and easy maneuverability make ATVs ideal in many work settings. 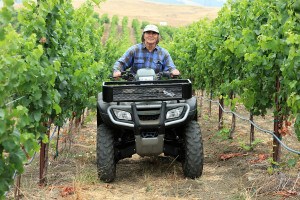 Farmers and other land owners have described ATVs as filling a valuable niche between a truck and a tractor. Since licensing and training requirements vary widely by state many companies conduct their own training or use the resources available to public and private organizations from the ATV Safety InstituteExternal Web Site Icon, a not-for-profit division of the Specialty Vehicle Institute of America.

What the Data Tell Us

Nearly 300 ATV-related deaths occurred in work settings from 1992-2007. Deaths have been steadily increasing, from 11 in 1992 to 41 in 2007, with a majority (61 percent) of the affected workers employed in agriculture production. Over half of the fatal crashes occurred on farms, while 20 percent occurred on highways. Half of the fatal incidents involved rolls and overturns.

ATV operators 65 years of age and older may be at increased risk of injury. These workers can experience various physical and sensory limitations which may exacerbate the inherent dangers associated with ATVs. These limitations may include decreased reaction time, visual and hearing limitations, decreased circulation, decreased strength and muscle range of motion that affects mobility, balance, reaction time and endurance. The use of multiple medications, with differing side effects, may also influence the older driver’s ability to operate the ATV safely. Older workers should be aware of these possible increased risks and exercise more caution when operating an ATV.

A review of 129 ATV-related occupational deaths from 2003-2006 indicated that the collective lifetime societal cost of these deaths was $103.6 million, with an average cost of $803,100 per death.

Eleven states, all in the western U.S., accounted for over 60 percent of the deaths, with four states (Montana, Texas, Colorado and South Dakota) accounting for nearly one-third of all work-related ATV deaths during the four-year period. Nearly two-thirds of the deaths were to workers in agricultural production at a cost of $62.3 million.

Dr. Helmkamp is a Senior Epidemiologist in the NIOSH Western States Office.