A Minnesota doctor took offense when a patient’s son posted critical remarks about him on some rate-your-doctor websites, including a comment by a nurse who purportedly called the physician “a real tool.” 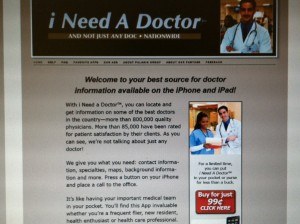 So Dr. David McKee had an unusually aggressive response: He sued the son for defamation. The Duluth neurologist’s improbable case has advanced all the way to the Minnesota Supreme Court, which is weighing whether the lawsuit should go to trial.

“His reputation is at stake. He does not want to be a target for false and malicious remarks,” said his lawyer, Marshall Tanick.

McKee’s case highlights the tension that sometimes develops on websites such as Yelp and Angie’s List when the free speech rights of patients and their families clash with the rights of doctors, lawyers and other professionals to protect their good names.

“Patients now have power to affect their businesses in ways they never had,” said Eric Goldman, a professor at the Santa Clara University School of Law who studies the issue. Health care providers are “evolving how to deal with patient feedback, but they’re still in the process of learning how to do that.”

Most online reviews never provoke any response. And successful challenges to negative reviews are rare. Americans are legally entitled to express opinions, as long as they don’t knowingly make false statements.

But if the two sides contest basic facts, disputes can swiftly escalate.

At issue are six of Dennis Laurion’s statements, including the account of the nurse’s name calling. McKee and his attorney say the unnamed nurse doesn’t exist and that Laurion invented her to hide behind. Laurion maintains she is real, but he can’t recall her name.

In arguments before the court in September, Laurion attorney John Kelly said his client’s statements were legally protected opinion that conveyed dismay over how McKee treated Laurion’s father, who had suffered a stroke. The posts described a single visit that lasted 10 to 15 minutes.

The review said McKee seemed upset that after Laurion’s father had been moved from intensive care to a regular hospital room, the doctor “had to spend time finding out if you transferred or died.”

Laurion also complained that McKee treated them brusquely and was insensitive to the family’s concerns about the patient being seen in public in a gown that gaped open in the back.

In an interview, Kelly said nothing Laurion posted was defamatory – a false statement that harms a person’s reputation.

The court is expected to rule on the case sometime in the next few months.

Lawsuits over professional reviews are uncommon in part because most patients write positive reviews, Goldman said. And many states have passed laws that block the kind of lawsuits that are filed mainly to scare someone into shutting up on matters of public concern.

Known as “strategic lawsuits against public participation,” those complaints are often forbidden by broad laws that protect criticism even if it’s wrong, Goldman said.

When health care providers do sue, they rarely succeed. Of 28 such lawsuits that Goldman tracked, 16 had been dismissed and six settled. The others were pending.

One notable exception was a Maine case in which a chiropractor sued a former patient for postings on Facebook and websites that accused him of sexually assaulting her. The courts concluded she probably fabricated her story.

In June, a judge ruled that the chiropractor could legally attach $100,000 worth of the patient’s property to his claim as security pending further proceedings in the case, which remains open.

Yelp says reviewers are well within their rights to express opinions and relate their experiences.

Spokeswoman Kristen Whisenand says the company discourages professionals from using what she called the “nuclear option” of suing over a negative review. She said they rarely succeed and wind up drawing more attention to the review they dislike.

Jeff Hermes, director of the Citizens Media Law Project at Harvard University’s Berkman Center for Internet and Society, said people who want to post critical reviews should think about whether they can back up their statements. And they can strengthen their position by stating the facts on which their opinions are based.

Goldman advises reviewers to remember that they are still taking a risk anytime they criticize someone in a public forum.

“The reality is that we bet our house every time that we post content online,” Goldman said. “It’s a lousy answer from a societal standpoint because we need people to share their experiences so vendors will be punished or rewarded as appropriate.”