The maker of Banana Boat sunscreen is recalling a half-million bottles of spray-on lotion after reports that a handful of people have caught on fire after applying the product and coming in contact with open flames. 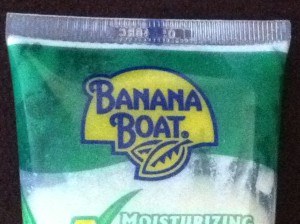 Energizer Holdings Inc., based in St. Louis, said Friday that it is pulling 23 varieties of UltraMist sunscreen off store shelves due to the risk of the lotion igniting when exposed to fire.

A company spokesman said there have been five reports of people suffering burns after using the sunscreen in the last year. Four burn cases were reported in the U.S. and one in Canada.

More than 20 million units have been sold since UltraMist launched in 2010, the spokesman said.

The problem appears to be caused by UltraMist’s spray valve, which is over applying the product, Energizer said in a statement. As a result the lotion is taking longer to dry, which raises the flammability risk.

“If a consumer comes into contact with a flame or spark prior to complete drying of the product on the skin, there is a potential for the product to ignite,” the company said.

UltraMist’s label warns users: “Keep away from sources of ignition – no smoking.”

But dermatologists say most people don’t read such labels.

“So many people put this on outside, while they’re on their way to activities, so I just don’t think people are aware of that,” said Dr. Michele Green, a dermatologist at New York’s Lenox Hill Hospital.

Green said aerosol sunscreens have become popular in recent years because they’re faster and easier to apply than traditional creams.

Doctors and burn experts said Friday the problem appears to be extremely rare.

“I’ve been doing this for 30 years and I’ve never seen or heard of this happening before,” said Dr. Darrel Rigel, professor of dermatology at New York University.

Rigel pointed out that the flammable ingredients in aerosol, including alcohol, are common to many products, such as hairspray and spray-on deodorants.

“I think you just have to use common sense and not be near an open fire when you put on aerosol anything,” said Rigel, a past president of the American Academy of Dermatology.

Dan Dillard, executive director of the Burn Prevention Network, said the group was contacted earlier this year about two burns related to spray-on sunscreen. One case involved a man who was standing near a barbecue grill, and the other involved a woman working with welding equipment. Both cases resulted in second- and third-degree burns.

“We’ve found no evidence of this happening before the incidents that came to our attention,” Dillard said.

Energizer Holdings said it has notified the Food and Drug Administration about the recall, which it undertook voluntarily.

Lumber Buyers ‘Pay Up or Run Out’ Amid U.S. Homebuilding Surge