Honda Motor Co. is recalling about 489,000 CR-V crossovers in the U.S., Europe and Africa, from the 2002 to 2006 model years because an electrical switch in the driver’s side door could melt and cause a fire. 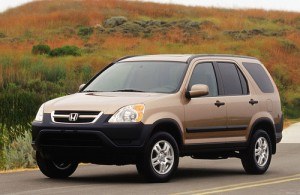 Honda and the National Highway Traffic Safety Administration announced the recall Saturday for 268,000 vehicles in the U.S.

Honda is also recalling 220,000 CR-V vehicles in Europe and 98 in Africa for the same problem, Honda spokeswoman Akemi Ando in Tokyo said Sunday.

Honda said rain or other liquids could enter through a driver’s open window and damage the master power switch on the door. If that happens, the switch could overheat and melt, causing a fire.

All the recalled vehicles were manufactured at a Honda plant in Great Britain.

NHTSA said owners should park CR-Vs from those model years outside until the recall is performed to avoid any property damage from a fire. A fire could start even when the ignition is off and the CR-V is parked.

Honda agreed that concerned owners should park their CR-Vs away from structures that could burn. But spokesman Ed Miller emphasized that a switch is unlikely to catch fire unless someone spilled liquid on it or let a large amount of rain into the vehicle through the driver’s side window.

The company will begin contacting owners next month and will repair the vehicles for free. Honda will install a cover plate inside the switch to prevent any liquid from coming in, Miller said.

It was the third major recall this week for the Japanese automaker, which usually sits near the top in J.D. Power and Associates’ annual rankings of vehicle quality.

Earlier this week, the company said it was recalling 820,000 Civic compact and Pilot SUVs from the 2002 through 2004 model years because the headlights can fail. CR-Vs were recalled earlier this spring for that same issue.

Honda also said this week that it’s recalling 600,000 Accord midsize cars because a faulty power steering house can leak and cause a fire. That recall affects Accords with V6 engines from the 2003 to 2007 model years.

NHTSA also announced earlier this week that it’s investigating complaints that Honda Odyssey minivans and Pilot SUVs can roll away after drivers remove the ignition key. That investigation involves vehicles from the 2003 and 2004 model years.