A couple of years ago, Hesham Rakha misjudged a yellow traffic light and entered an intersection just as the light turned red. A police officer handed him a ticket.

He’s not trying to defend his action. Rakha, director of the Center for Sustainable Mobility at the Virginia Tech Transportation Institute, is describing his research. Since 2005, his research group has been studying drivers’ behaviors as they approach yellow lights. Their goal is to determine signal times for intersections that are safer and still efficient. 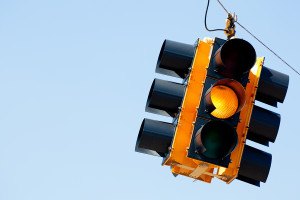 If a driver decides to stop when instead of proceeding, rear-end crashes could occur. If a driver proceeds instead of stopping, collisions with side street traffic could occur. Although observation-based research shows that only 1.4 percent of drivers cross the stop line after the light turns red, more than 20 percent of traffic fatalities in the United States occur at intersections.

“If the yellow time is not set correctly, a dilemma zone is eminent,” Rakha said.

“The dilemma zone occurs when the driver has no feasible choice,” he said. “In other words the driver can neither stop nor proceed through the intersection before the light turns red. This can also occur if the approaching vehicle is traveling faster than the posted speed limit and/or if the driver’s perception and reaction time is longer than the design one-second value.”

In most cases, the yellow time is set for 4.2 seconds on a 45 mph road. The time is longer for higher-speed roads. “These timings are based on two assumptions,” Rakha explains. “Namely, the driver requires one second to perceive and react to the change in signal indication and that the driver requires 3.2 seconds to stop from 45 mph at a comfortable deceleration level, assumed to be 3 meters per second squared (3 m/s2 ) or 10 feet per second squared.”

For his studies, Rakha’s used Virginia’s Smart Road, located at the Virginia Tech Transportation Institute. The Smart Road intersection has a signal that can be controlled for length of the red, yellow and green lights. “We can study driver behavior by changing the signal when the driver is a certain distance from the intersection.”

Center for Sustainable Mobility researchers have determined that half of drivers make the stop-go decision three seconds before the stop line. Of those that go, few clear the intersection before the light changes to red. In Virginia, if you are in the intersection when the light turns red, you are not running a red light. However, there is still risk.

The specific findings from the Smart Road study are that 43 percent of drivers who crossed the stop line during the yellow time were not able to clear the intersection before the light turned red. At 45 mph, it takes 1.5 seconds to clear a 30-meter (98.4 feet) intersection. “If the all-red interval is the minimum conventional one second, then there is a potential risk that the legal yellow-light runners would not be able to completely clear the intersection at the instant the side-street traffic gains the right-of-way,” the researchers reported at the Transportation Research Board Annual Meeting in 2010.

People over 60 years of age have a longer perception-reaction time, so they have to brake harder to stop. But they are more likely to try to stop, compared to younger drivers. However, if they keep going, they are unlikely to clear the intersection, the researchers report.

“Even if yellow timing is designed properly to avoid a dilemma zone, someone driving above the speed limit could encounter a dilemma because it takes longer to stop from a higher speed. They could speed up, but our studies show that drivers who keep going usually maintain their speed,” Rakha said.

The research determined that the perception-reaction time is slightly longer than one second, but that driver deceleration levels are significantly higher than the deceleration level assumed for traffic signal design.

If the road conditions are poor, drivers react 15 percent slower because they are processing more information. Deceleration level decreases by 8 percent. “In such conditions, you need a longer yellow,” Rakha said.

He and his team has developed a novel procedure to compute the yellow and change interval duration that accounts for the risk of drivers being caught in the dilemma zone. Using this procedure they have created tables for light vehicles at various speeds for dry roads and wet roads, so that traffic planners can set traffic signals that can be adjusted to roadway surface and weather conditions. They also created tables for the driving characteristics for different age groups.

One strategy to make intersections safer might be more use of caution lights that tell drivers a green light is about to change, so the driver has a longer time to react. Such systems now are used on high speed roads, where the stopping distance is longer, and when the lighted intersection is not visible until the last seconds.

The research has been presented at the 2010 and 2011 Transportation Research Board annual meetings. Articles published in 2012 are:

“Designing Yellow Intervals for Rainy and Wet Roadway Conditions,” by Huan Li of Blacksburg, who has received his master of science degree in civil engineering; Rakha; and El-Shawarby. The article appeared in the spring 2012 issue of the International Journal of Transportation Science and Technology.