Those simple but often overlooked steps can help protect some of the most critically ill patients – those on ventilators – from developing deadly pneumonia. And if they knew about them, family members could ensure the steps weren’t forgotten.

Hospitals are rife with infections and opportunities for medical mistakes. Now, a nearly $9 million project at Johns Hopkins University aims to combine engineering with the power of patients and their families to prevent some of the most common threats. 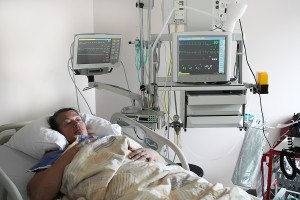 The idea: Design patient safety to be more like a car’s dashboard, which automatically signals drivers when the oil needs changing or if a passenger forgot to buckle up, or like the countdown systems that make sure no step is missed when a satellite is launched.

And too often, the people best able to spot early warning signs – patients and their families – are treated as passive bystanders rather than encouraged to participate in their care, he said.

The foundation, created by Intel co-founder Gordon Moore, announced Tuesday that it is funding the Hopkins work as the first step in a planned 10-year, $500 million effort to improve patient safety and family engagement in hospitals around the country. Separately, the Institute of Medicine has signed on to help, partnering with the National Academy of Engineering, to bring together top experts on how to design safety systems.

Sometimes the failure to merely discuss treatment with patients or their families causes the harm. Consider Nicole D. James, a commercial property manager in Elkridge, Md., who undergoes frequent overnight hospital stays to treat the intense pain of sickle cell anemia. One such visit turned into a miserable two-week stay when the ER doctor added a powerful antibiotic to James’ usual pain treatment without telling her first – a drug that worsened her sickle cell crisis.

It turned out the doctor had spotted a shadow on James’ lung X-ray that he thought was pneumonia but that she could have told him, and her regular physician confirmed, really was old scar tissue.

“I know what’s normal for me,” said James, 37, who now insists that relatives drive past closer hospitals for Hopkins, where her doctor practices, no matter how late at night or intense her pain. Because the doctors know her, “I am not just somebody lying on the table. I am part of the team.”

Tens of thousands of preventable deaths occur in U.S. hospitals every year. Numerous programs are under way to improve patient safety. Among them is the government’s Partnership for Patients, funded by $1 billion from the new health care law, that is helping hospitals adopt proven safety strategies.

Hopkins’ Pronovost led the creation of one of the most well-known – a simple checklist that ensures hospital workers follow steps that lower the risk of deadly bloodstream infections from common IV catheters. That checklist now is being used in ICUs nationwide, and the government reported last year that those infections have plummeted by 60 percent as a result.

But catheter infections are just one of a dozen serious hospital-caused harms that threaten ICU patients, Pronovost said. Rather than fighting them one at a time, his new project will target multiple ICU threats simultaneously – from ventilator-associated pneumonia to deadly blood clots – without relying on old-fashioned paper checklists and with more family involvement.

It will require linking medical devices that today don’t talk to each other, he said. For instance, pumps that deliver narcotic painkillers aren’t linked to other devices that monitor breathing. If connected, the painkillers could be stopped automatically at the first sign of respiratory problems, a known side effect.

Other protections are far less complex. Keeping the head of the bed elevated at least 30 degrees and good oral hygiene are among the steps that help fend off the pneumonia that kills 36,000 people a year while they’re on ventilators. That’s something family members can watch for – or they even can be trained to brush a loved one’s teeth around the breathing tube.

Already, Hopkins has introduced a “family involvement menu” of care items. “We believe that you know the person that we are caring for far better than we do,” the menu reads.

Ultimately, Pronovost envisions an iPad-like device that allows both health workers and family members to see at a glance which of dozens of required daily care steps have been performed and which still need to be.

“The beauty of checklists is it gives you that constant visual reminder,” and an electronic, automated version is the next logical evolution, said Ann Marie Pettis, director of infection prevention at the University of Rochester Medical Center, who called the project intriguing.

Engaging the patient and family in some ways is tougher. Hospitals have had a hard time encouraging people to ask doctors and nurses if they’ve washed their hands, said Gina Pugliese of the Premier Safety Institute, a hospital improvement alliance.

“So many patients and families are hesitant to ever question the doctor,” she said. “It’s so important they get involved.”