According to the National Highway Traffic Safety Administration, more than 5 million wrecks occur every year. However, according to a July 2012 survey from the National Association of Insurance Commissioners (NAIC), many Americans do not know what steps to take or basic information to share — or not share — after an accident. They may even put their identities and safety at risk by sharing too much personal information.

A new WreckCheck mobile application from the NAIC may help eliminate that risk. 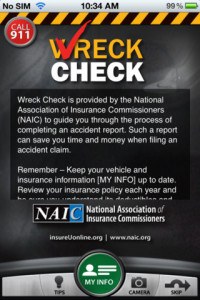 The recent survey revealed consumers were unsure about auto accident best practices, such as when to call the police or what personal information to exchange with the other driver after an accident.

Consumers generally need only share their names, correct vehicle insurance information and the phone numbers of insurance providers. Sharing additional personal information, such as driver’s license numbers and home addresses, puts consumers, their property and their safety at risk. The most common misperceptions and associated risks were:

Identity theft is one of the fastest-growing crimes in the United States. The Federal Trade Commission estimates nearly 9 million consumers have their identities stolen each year, disrupting finances and damaging credit histories and reputations.

“The last thing you’re probably thinking about following a car accident is protecting your privacy,” says NAIC President and Florida Insurance Commissioner Kevin M. McCarty. “Understanding what information to share, and with whom, will help keep you safe after an accident and decrease some of the challenges of filing a claim later on. That’s also why the NAIC created WreckCheck. The app will take the guess work out of what information to get following a car accident.”

The new WreckCheck mobile application from the NAIC outlines what to do immediately following an auto accident and takes users through a step-by-step process to create their own accident report. It also provides safety tip, captures photos and documents the necessary information to file an insurance claim. The app also lets users email a completed accident report directly to themselves and their insurance agents. The app is free and available for both iPhone and Android smartphone users.

Drivers can visit InsureUOnline.org for additional information about what to do following an auto accident. Also available on the site is a downloadable accident checklist, a video demo, an audio news release, and other materials to help consumers protect themselves after an accident.