Ford Motor Co is recalling some of its recently launched 2013 Escape compact sport-utility vehicles because a carpeting flaw may cause drivers to apply the brakes improperly, increasing stopping distances and the risk of crashes. 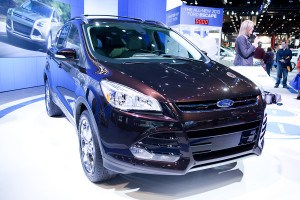 The recall affects 8,266 vehicles built between March 8 and June 7, according to papers filed with the National Highway Traffic Safety Administration.

Ford said improperly installed carpet padding the center console trim panel may cause a driver’s foot to contact the side of the brake pedal when it moves from the accelerator to the brake.

The automaker said that on affected vehicles it will remove the carpet padding and left-side console trim panel and replace it with a new panel. The recall begins on July 23.

One of Ford’s highest-profile launches in recent years, the Escape was the company’s second-best selling vehicle. It was the sixth best-selling vehicle overall in the United States in June, with sales of 28,500. The top seller was Ford’s F-Series truck.

Heavy Rains in the Balkans Cause Flooding, Killing 6 People