Letting autoworkers sit while they reach into a car’s interior could help prevent shoulder and back strain – but another solution might be to tilt the entire car so that workers can stand up. 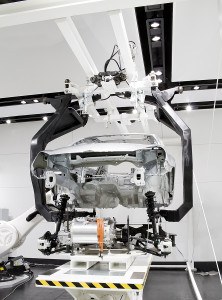 That’s the finding of two recent studies, which tested two ways to protect autoworkers from injury.

Sitting on a cantilevered chair reduced the stress on the workers’ backs and shoulders for three common installation tasks. But a different strategy – tilting a car sideways on a carriage so that workers could access the interior while standing – reduced the stress for nine different tasks.

The car carriage appears to be a better overall option for preventing injuries, explained William Marras, professor and Honda Endowed Chair in the Department of Integrated Systems Engineering at Ohio State University.

“Under these conditions, if you can tilt the car, the chair becomes unnecessary,” said Marras, who directs Ohio State’s Center for Occupational Health in Automotive Manufacturing (COHAM), where the tests took place.

Honda Motor Co. asked the COHAM team to test the commercially available chair as well as the car carrier, both of which are already used in some of its plants and by other manufacturers around the country.

To use the chair, workers sit on a padded seat at the end of an L-shaped steel beam that is locked into a track above. The “L” slides back and forth as workers use their legs to pull the chair across the floor and into the car.

The researchers tested 10 men and women, five of whom were experienced autoworkers. The other five were college student volunteers, intended to represent first-time, untrained autoworkers. They rode the chair into and out of a car frame while they tightened bolts and installed seat belts, shoulder slides, roof consoles, and dome lights. Wired with sensors to monitor muscle strain, the subjects performed these tasks over a simulated eight-hour workday.

In only three situations – installing the roof console and insulation and tightening bolts in the center of the car – did sitting in the chair reduce loads on the spine and shoulder stress.

The chair didn’t help much when workers had to reach the sides or back of the car, either. For installation tasks at the edge of the vehicle, sitting in the chair reduced spine load but did nothing to reduce shoulder stress.

“We thought that sitting down inside the car would make installing the seatbelt easier, but it turned out that you’d need two right hands,” said Sue Ferguson, senior research engineer at COHAM and lead author of the study.

Originally, the cantilever chair came with a bucket seat that prevented workers from moving freely. The researchers replaced it with a flat seat and simplified the cantilever system overall. The new design was more practical than the original, and much less expensive: it cost $4,000 to build compared to the original’s $100,000.

In the car carriage study, the researchers had 12 people install equipment in a car’s interior, underbody, and engine room while standing. They measured stresses on the people’s bodies when the car was tilted at different angles.

Because of the modification that the researchers made to the seat in the chair study, they began to think about ways to improve seats in general. They are now working with a seat manufacturer to discover more features that make a seat comfortable and functional.

Meanwhile, Honda is using the Ohio State team’s discoveries to improve the ergonomics of their factories. In 2007, the company reported that it was able to reduce injuries by 70 percent over five years by adopting these strategies.