Although racing purists might recognize the Stutz Bearcat or the Mercer Raceabout as America’s first sports cars, there is no question that the Chevrolet Corvette holds the title as America’s oldest, continuously produced sports car.

The public saw the Corvette for the first time in January 1953, at the Motorama Show held at New York City’s Waldorf Astoria hotel. It went into full production on June 30, 1953, at the General Motors facility in Flint, Mich. By the end of the year, 300 were produced—all of them white convertibles with red interiors and black soft tops. The price tag was $3,498 with a heater and AM radio as the only options.

Often compared to more exotic European sports cars, the Corvette has performed well in racing circuits around the globe. However, with the introduction of the supercharged, 620hp ZR-1 in 2009, Corvette has convinced its few remaining skeptics that it can perform on the world racing stage, as well as (and mostly better than) cars three times its price tag.

It’s no surprise then to find Corvette owners doting over their cars and keeping them in showroom condition. But like other items of high value and popular attraction, they get stolen. NICB reviewed Corvette theft data from 1953-2011 and identified 134,731 theft records. However, since the National Highway Traffic Safety Administration required vehicle identification number (VIN) standardization beginning with the 1981 model year, confidence in pre-1981 records is low due to the inconsistency in reporting protocols and VIN systems. Consequently, only 1981 and later data was used to produce this report. 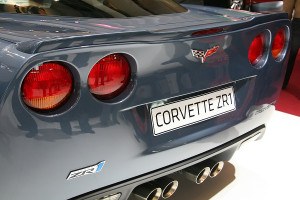 The following graph shows the 10 most stolen Corvette model years for the period 1981-2011.