NICB reviewed slip and fall claims referred between January 1, 2010 and December 31, 2011 and found an increase of of 12 percent in questionable claims referrals. 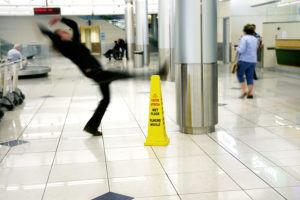 Without any doubt these kinds of accidents occur and innocent people sustain serious injuries as a result. That’s why most people and business owners carry insurance.

Unfortunately, there is a criminal element that sees slip-and-falls as an easy way to obtain money.

Although many of these incidents are attempted against large businesses, NICB has learned of several attempts to extort money from small retail operators using the threat of slip-and-fall litigation to obtain cash payments from shop owners. In this example, a slip-and-fall artist fakes an injury at a small retail shop then tells the store owner that he will need medical treatment.

After a period of time, the “injured” person returns to the store to inform the shopkeeper that his out-of-pocket medical bills were, say, $1,500 and that he has no choice but to sue for reimbursement. At some point the store owner is told that he can pay that amount in cash to the victim and the victim will consider it a closed matter. This “pay-and-forget” option is often viewed by shopkeepers as an easy way out of a potentially costly mess. Unfortunately, it encourages more fraud.

Most of these slip-and-fall extortions are never reported to law enforcement or to insurance companies making it very difficult to gauge the extent of the problem.