U.S. hospitals are ripping out wall-mounted toilets and replacing them with floor models to better support obese patients. The Federal Transit Administration wants buses to be tested for the impact of heavier riders on steering and braking. Cars are burning nearly a billion gallons of gasoline more a year than if passengers weighed what they did in 1960. 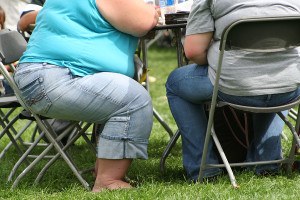 The nation’s rising rate of obesity has been well-chronicled. But businesses, governments and individuals are only now coming to grips with the costs of those extra pounds, many of which are even greater than believed only a few years ago: The additional medical spending due to obesity is double previous estimates and exceeds even those of smoking, a new study shows.

Many of those costs have dollar signs in front of them, such as the higher health insurance premiums everyone pays to cover those extra medical costs. Other changes, often cost-neutral, are coming to the built environment in the form of wider seats in public places from sports stadiums to bus stops.

The startling economic costs of obesity, often borne by the non-obese, could become the epidemic’s second-hand smoke. Only when scientists discovered that nonsmokers were developing lung cancer and other diseases from breathing smoke-filled air did policymakers get serious about fighting the habit, in particular by establishing nonsmoking zones. The costs that smoking added to Medicaid also spurred action. Now, as economists put a price tag on sky-high body mass indexes (BMIs), policymakers as well as the private sector are mobilizing to find solutions to the obesity epidemic.

“As committee chairmen, Cabinet secretaries, the head of Medicare and health officials see these really high costs, they are more interested in knowing, ‘what policy knob can I turn to stop this hemorrhage?'” said Michael O’Grady of the National Opinion Research Center, co-author of a new report for the Campaign to End Obesity, which brings together representatives from business, academia and the public health community to work with policymakers on the issue.

The U.S. health care reform law of 2010 allows employers to charge obese workers 30 percent to 50 percent more for health insurance if they decline to participate in a qualified wellness program. The law also includes carrots and celery sticks, so to speak, to persuade Medicare and Medicaid enrollees to see a primary care physician about losing weight, and funds community demonstration programs for weight loss.

Such measures do not sit well with all obese Americans. Advocacy groups formed to “end size discrimination” argue that it is possible to be healthy “at every size,” taking issue with the findings that obesity necessarily comes with added medical costs.

The reason for denominating the costs of obesity in dollars is not to stigmatize plus-size Americans even further. Rather, the goal is to allow public health officials as well as employers to break out their calculators and see whether programs to prevent or reverse obesity are worth it.

The percentage of Americans who are obese (with a BMI of 30 or higher) has tripled since 1960, to 34 percent, while the incidence of extreme or “morbid” obesity (BMI above 40) has risen sixfold, to 6 percent. The percentage of overweight Americans (BMI of 25 to 29.9) has held steady: It was 34 percent in 2008 and 32 percent in 1961. What seems to have happened is that for every healthy-weight person who “graduated” into overweight, an overweight person graduated into obesity.

Because obesity raises the risk of a host of medical conditions, from heart disease to chronic pain, the obese are absent from work more often than people of healthy weight. The most obese men take 5.9 more sick days a year; the most obese women, 9.4 days more. Obesity-related absenteeism costs employers as m u ch as $6.4 billion a year, health economists led by Eric Finkelstein of Duke University calculated.

Even when poor health doesn’t keep obese workers home, it can cut into productivity, as they grapple with pain or shortness of breath or other obstacles to working all-out. Such obesity-related “presenteeism,” said Finkelstein, is also expensive. The very obese lose one month of productive work per year, costing employers an average of $3,792 per very obese male worker and $3,037 per female. Total annual cost of presenteeism due to obesity: $30 billion.

Decreased productivity can reduce wages, as employers penalize less productive workers. Obesity hits workers’ pocketbooks indirectly, too: Numerous studies have shown that the obese are less likely to be hired and promoted than their svelte peers are. Women in particular bear the brunt of that, earning about 11 percent less than women of healthy weight, health economist John Cawley of Cornell University found. At the average weekly U.S. wage of $669 in 2010, that’s a $76 weekly obesity tax.

The medical costs of obesity have long been the focus of health economists. A just-published analysis finds that it raises those costs more than thought.

Obese men rack up an additional $1,152 a year in medical spending, especially for hospitalizations and prescription drugs, Cawley and Chad Meyerhoefer of Lehigh University reported in January in the Journal of Health Economics. Obese women account for an extra $3,613 a year. Using data from 9,852 men (average BMI: 28) and 13,837 women (average BMI: 27) ages 20 to 64, among whom 28 percent were obese, the researchers found even higher costs among the uninsured: annual medical spending for an obese person was $3,271 compared with $512 for the non-obese.

Nationally, that comes to $190 billion a year in additional medical spending as a result of obesity, calculated Cawley, or 20.6 percent of U.S. health care expenditures.

That is double recent estimates, reflecting more precise methodology. The new analysis corrected for people’s tendency to low-ball their weight, for instance, and compared obesity with non-obesity (healthy weight and overweight) rather than just to healthy weight. Because the merely overweight do not incur many additional medical costs, grouping the overweight with the obese underestimates the costs of obesity.

Contrary to the media’s idealization of slimness, medical spending for men is about the same for BMIs of 26 to 35. For women, the uptick starts at a BMI of 25. In men more than women, high BMIs can reflect extra muscle as well as fat, so it is possible to be healthy even with an overweight BMI. “A man with a BMI of 28 might be very fit,” said Cawley. “Where healthcare costs really take off is in the morbidly obese.”

Those extra medical costs are partly born by the non-obese, in the form of higher taxes to support Medicaid and higher health insurance premiums. Obese women raise such “third party” expenditures $3,220 a year each; obese men, $967 a year, Cawley and Meyerhoefer found.

One recent surprise is the discovery that the costs of obesity exceed those of smoking. In a paper published in March, scientists at the Mayo Clinic toted up the exact medical costs of 30,529 Mayo employees, adult dependents, and retirees over several years.

“Smoking added about 20 percent a year to medical costs,” said Mayo’s James Naessens. “Obesity was similar, but morbid obesity increased those costs by 50 percent a year. There really is an economic justification for employers to offer programs to help the very obese lose weight.”

LIVING LARGE, BUT NOT DYING YOUNG

For years researchers suspected that the higher medical costs of obesity might be offset by the possibility that the obese would die young, and thus never rack up spending for nursing homes, Alzheimer’s care, and other pricey items.

That’s what happens to smokers. While they do incur higher medical costs than nonsmokers in any given year, their lifetime drain on public and private dollars is less because they die sooner. “Smokers die early enough that they save Social Security, private pensions, and Medicare” trillions of dollars, said Duke’s Finkelstein. “But mortality isn’t that much higher among the obese.”

Beta blockers for heart disease, diabetes drugs, and other treatments are keeping the obese alive longer, with the result that they incur astronomically high medical expenses in old age just like their slimmer peers.

Some costs of obesity reflect basic physics. It requires twice as much energy to move 250 pounds than 125 pounds. As a result, a vehicle burns more gasoline carrying heavier passengers than lighter ones.

“Growing obesity rates increase fuel consumption,” said engineer Sheldon Jacobson of the University of Illinois. How much? An additional 938 million gallons of gasoline each year due to overweight and obesity in the United States, or 0.8 percent, he calculated. That’s $4 billion extra.

Not all the changes spurred by the prevalence of obesity come with a price tag. Train cars New Jersey Transit ordered from Bombardier have seats 2.2 inches wider than current cars, at 19.75 inches, said spokesman John Durso, giving everyone a more comfortable commute. (There will also be more seats per car because the new ones are double-deckers.)

The built environment generally is changing to accommodate larger Americans. New York’s commuter trains are considering new cars with seats able to hold 400 pounds. Blue Bird is widening the front doors on its school buses so wider kids can fit. And at both the new Yankee Stadium and Citi Field, home of the New York Mets, seats are wider than their predecessors by 1 to 2 inches.

The new performance testing proposed by transit officials for buses, assuming an average passenger weight of 175 instead of 150 pounds, arise from concerns that heavier passengers might pose a safety threat. If too much weight is behind the rear axle, a bus can lose steering. And every additional pound increases a moving vehicle’s momentum, requiring more force to stop and thereby putting greater demands on brakes. Manufacturers have told the FTA the proposal will require them to upgrade several components.

Hospitals, too, are adapting to larger patients. The University of Alabama at Birmingham’s hospital, the nation’s fourth largest, has widened doors, replaced wall-mounted toilets with floor models able to hold 250 pounds or more, and bought plus-size wheelchairs (twice the price of regulars) as well as mini-cranes to hoist obese patients out of bed.

The additional spending due to obesity doesn’t fall into a black hole, of course. It contributes to overall economic activity and thus to gross domestic product. But not all spending is created equal.

“Yes, a heart attack will generate economic activity, since the surgeon and hospital get paid, but not in a good way,” said Murray Ross, vice president of Kaiser Permanente’s Institute for Health Policy. “If we avoided that heart attack we could have put the money to better use, such as in education or investments in clean energy.”

The books on obesity remain open. The latest entry: An obese man is 64 percent less likely to be arrested for a crime than a healthy man. Researchers have yet to run the numbers on what that might save.