More than 200 years after Benjamin Franklin declared the only things certain in life are death and taxes, Canadian researchers have discovered a grimmer connection: U.S. auto fatalities spike on the deadline day for filing income tax returns.

The number of fatal crashes jumps 6 percent on the last day for U.S. taxpayers to file their federal income taxes statements, the study by the University of Toronto’s Sunnybrook Research Institute showed.

The 2012 tax deadline in the United States is Tuesday, April 17. 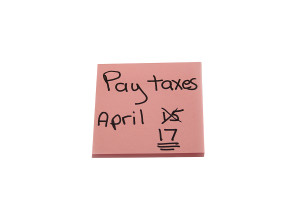 The stress of the tax deadline could be one reason for the increase in fatal accidents, along with altered traffic patterns, wrote the study’s authors, Dr. Donald Redelmeier and Christopher Yarnell.

“Although electronic submissions might be expected to lessen driving on tax day, we observed an increase rather than a decrease in fatal crashes in recent decades,” the study said.

Other factors might be lack of sleep, less tolerance of hassles and inattention. The typical crash victim was a young man driving “in a rural location,” it said.

The heightened crash risk is similar to that for Super Bowl Sunday, the day of the U.S. professional football championship game, another link that Redelmeier has studied.

He and Yarnell compiled crash statistics from the National Highway Traffic Safety Administration from 1980 to 2009. They matched the crashes that took place on tax days against those that took place one week before and after.

The data showed that 6,783 people were killed on tax deadline days versus a total 12,758 on the other days.

Redelmeier and Yarnell urged public campaigns for road safety on tax-filing days, including use of seatbelts.

The study was published in the letters section of the Journal of the American Medical Association.