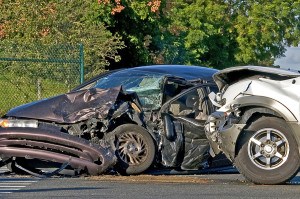 What Happens When Small Cars Meet Big Cars on the Road?

Small cars have always been with us, but with new incentives driven by the high level of fuel prices in the past few years, automobile manufacturers are introducing a swarm of small and even “micro” cars to an eager buying public. With modern, robust construction and materials, and the latest safety technologies in place, these new small-car entries are in many cases able to attain high marks in federal and insurance crash safety ratings.

Yet what do the laws of physics dictate when “David” meets up with “Goliath” on the road?

While it has long been common public perception that the size and weight of a large car generally equates to a safer car, this issue may become somewhat confused by the advent of safety ratings issued by federal and insurance organizations based on crash testing. The two most common and publicly accessible ratings are issued by the National Highway Transportation Safety Administration (NHTSA) and the Insurance Institute for Highway Safety (IIHS).

NHTSA issues ratings of between 1 and 5 stars, which signify a statistical risk level of occupant injury in a given crash scenario, with 5 stars being the best rating.

IIHS gives a rating of poor-marginal-acceptable-good, based partly on occupant injury risk, but also based on subjective evaluations of vehicle structural performance and occupant movements. These ratings are based on crash tests conducted primarily against a rigid barrier, or a 3,000-pound moving barrier intended to simulate another vehicle in side and rear impacts.

There can be no doubt that cars today are safer than ever before because of the continuous development of safety features, including seat belts and pretensioners, a variety of air bags and side curtains, electronic traction, braking and stability controls, adaptive headrests, high-strength structural materials, and other technologies. Even so, certain physical laws of nature prevail. It comes down to Newton’s Second Law of physics;

For frontal crash evaluation particularly, testing is typically done using a rigid barrier. In a simplified sense, the car crashes into the barrier at some predetermined speed and comes to a stop. The change in the vehicle’s speed, in this case to zero, is commonly called the “Delta-V.” In a rigid barrier crash, the Delta-V is theoretically the same as the pre-crash speed (See Figure 1: Understanding Delta-V Vehicle Speed on right).

In reality, the Delta-V will actually be a bit higher because the car has a certain amount of spring-back or restitution, and will bounce away from the barrier at a reduced speed. Think of dropping a ball of soft putty (very low restitution) and a golf ball (high restitution) to the floor, and the difference in how high they bounce.

In the formula of F=ma, acceleration (a) can be equated to:

Newton’s Third Law of Physics dictates that the forces of action and reaction between any two interacting bodies are equal, opposite and collinear. What this means is that in a given rigid barrier crash test, the car is in essence crashing into the equivalent of an identical car traveling at the same speed in the opposite direction. Everything matches up; they come together in the middle and basically stop.

Where it gets more complicated is when the two vehicles coming together are not identical. This article only addresses mass issues. Size and proportional issues, such as bumper and structure height, crush space and stiffness compatibility are complications worthy of lengthy discussion on their own.

For simplicity, it is also assumed that in cars, “small” equates to “lighter” and “big” equates to “heavier.” Take, for example, the approximate curb weight of two recent products available on the American market: a 2009 Mercedes C-Class sedan and a 2009 Smart car (See Figure 2: Approximate Curb Weight). No endorsement or criticism of either product is intended, they just are two products from the same manufacturer that had similar safety ratings, yet very different size and weight characteristics. Both were given safety ratings by both the NHTSA and the IIHS (See Figure 3 Safety Ratings).

As noted, Newton dictates that the forces in a collision are equal and opposite. So while the forces acting on the two vehicles are equal, the masses are not — thus the accelerations are not, either. From Formula 1, the acceleration is inversely proportional to the mass. Laws governing Conservation of Momentum come into play. In its simplest form, laws of linear momentum dictate that:

Where W1 and W2 are the weights of vehicles 1 and 2, V1 and V2 are their respective velocities, and V3 is the velocity of the combined vehicles, stuck together after the impact like balls of putty. For simplicity, this ignores any restitution effects, and in essence says that the velocity of the combined vehicles is equal to the sum of the weight of each vehicle multiplied by its speed. This affects a collinear frontal or head-on crash in cars with mismatched weights.

In a hypothetical collinear frontal or head-on crash between a C-Class and a Smart car (See Figure 4: Momentum Effects in a Frontal Crash), the speed of each car is 40 mph, so the closing speed is 80 mph. Due purely to mass and momentum effects, the post-crash speed of the combined vehicles is 13 mph in the direction the C-Class was heading, with the Smart car being pushed toward the rear.

The numbers illustrate that what happens in a crash all relates to the weight of the vehicles; the C-Class weight is approximately twice that of the Smart Car. The Delta-V for each vehicle is inversely proportioned to its weight. While both cars have similar safety ratings in collisions with solid barriers, the physics is stacked against the small car in a collision with a heavier car.

This is reflected in testing reported in an April 2009 IIHS Status Report (Volume 44, Number 4). In that testing, a frontal crash test with a C-Class Mercedes and a closing speed of 80 mph resulted in the Smart car being given a “poor” rating, as compared to a “good” rating based on a 40 mph barrier crash test. As explained, the barrier crash test roughly simulates a frontal crash into another Smart car at a closing speed of 80 mph.

The bottom line is that while safety ratings such as those posted by the NHTSA and the IIHS are important and useful indicators, it must also be taken into account how they are developed and what they truly represent. From basic physics, in most collisions between a small car and a big (heavier) car or light truck, the small car occupants will be exposed to greater impact accelerations than those in the heavier car. Consequently, occupants of a small car likely will be exposed to greater injury risk.

Parker is a principal with Exponent, Inc. in its Detroit-area office.