The Obama Administration wants to overhaul how the government inspects U.S. chicken and turkey plants, the first such change in 50 years, to put greater focus on food safety and reduce by a small amount the number of food-borne illnesses.

The U.S. Agriculture Department unveiled the proposal on Friday, saying it would save money and focus the work of its inspectors on areas with the greatest risk of contamination. There would be 500-800 fewer inspectors if the plan is adopted.

Consumer groups were wary. While the USDA proposal calls for more testing for pathogens, it also allows companies to speed up slaughter lines, according to the Center for Science in the Public Interest.

The Consumer Federation of America said “there has been no independent review” in a decade to show the plan will work.

But poultry trade groups representating the industry said the USDA proposal “is the logical outgrowth” of the Hazard Analysis Critical Control Point rule adopted by USDA in 1998. It requires processors to identify the danger points for meat contamination and take steps to prevent it. 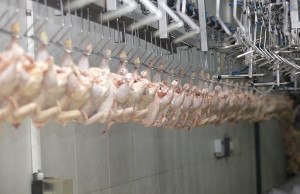 USDA said its plan, the first major overhaul of poultry inspection in 50 years, would devote more of inspector time to “off-line” activities such as pathogen sampling and verifying that sanitation and meat safety codes are being followed. It would continue its traditional slaughter-line inspections.

Poultry plants would have the option of switching to the new approach or staying under the current inspection regime. USDA will accept comments from the public for 90 days.

There are roughly 2,000 inspectors at the 175 plants that slaughter young chickens and turkeys that would be affected by the proposal, said USDA. It said the figure would be reduced by 500 to 800 positions because there would be fewer “line” inspectors.

USDA said the new system would reduce illnesses due to salmonella and campylobacter bacteria by 1.5 percent.

Chicken and turkey account for nearly half of U.S. meat consumption, forecast at 199 lbs per person this year.