One Oregon police chief was killed when a man allegedly took the officer’s gun and shot him in the head. A policeman in Arizona was fatally shot when he went to a suburban Phoenix apartment complex to help a probation officer. And two South Dakota officers were killed in a shootout after a traffic stop. 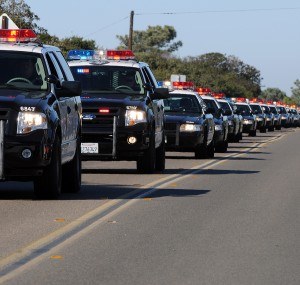 The number of fatalities from departments across the country caused by firearms made 2011 one of the deadliest years in recent history for U.S. law enforcement.

Across the nation, 173 officers died in the line of duty, up 13 percent from 153 the year before, according to numbers as of Wednesday compiled by the National Law Enforcement Officers Memorial Fund.

The nonprofit group that tracks police deaths also reported that 68 federal, state and local officers were killed by gunfire in 2011, a 15 percent jump from last year when 59 were killed. It marks the first time in 14 years that firearms fatalities were higher than traffic-related deaths. The data shows that 64 officers died in traffic accidents, down from the 71 killed in 2010.

Craig Floyd, the group’s chairman, blamed the rise on budget cuts to public safety departments. He cited surveys by police groups that showed many cut back on training and delay upgrading equipment, and referenced a Department of Justice report issued in October that said an estimated 10,000 police officers and sheriff’s deputies have been laid off within the past year.

“I’m very troubled that these drastic budget cuts have put our officers at a grave risks,” he said. “Our officers are facing a more brazen cold-blooded element and fighting a war on terror, and we’re giving them less training and less equipment they need to do their jobs safely.”

It’s the second year in a row the number of officers killed in the line of duty has grown. In 2009, the death toll dipped to 122 in a 50-year-low that encouraged police groups even though the year seemed to be an aberration. Otherwise, the number of police deaths has topped 160 five other times since 2000. It routinely topped 200 in the 1970s.

U.S. Attorney General Eric Holder called the deaths a “devastating and unacceptable trend” and said the Justice Department was determined to reverse the numbers. He said the office is supporting new training regimens and programs, one of which reimbursed departments with more than $23 million for about 80,000 new bulletproof vests. Those vests, he said, saved the lives of 16 officers in the last year.

“I want to assure the family members and loved ones who have mourned the loss of these heroes that we are responding to this year’s increased violence with renewed vigilance and will do everything within our power – and use every tool at our disposal – to keep our police officers safe,” Holder said.

The police deaths were spread across 41 states and Puerto Rico. The largest number of fatalities was reported in Florida, where 14 officers were killed, followed by Texas (13) New York (11), California (10) and Georgia (10). The New York City Police Department and Puerto Rico Police Department, which both lost four officers, were the law enforcement agencies that reported the most deaths.

Meanwhile, one city saw its first ever police death in the line of duty. In Bismarck, N.D. – a city of 60,000 residents and about 100 sworn officers – 32-year police veteran Sgt. Steven Kenner was fatally shot. Kenner had been responding to a domestic disturbance call.

The number of firearms-related fatalities, which have risen 70 percent since 2008, was particularly alarming to analysts. Of the 68 deaths, 14 took place while the officer was attempting an arrest, nine occurred during a domestic disturbance call and five were ambushes, according to the data.

One of the victims, Rainier, Ore., Police Chief Ralph Painter, was shot once in the head during a Jan. 5 struggle with a suspect who was accused of taking Painter’s pistol from his belt. Glendale, Ariz., Officer Brad Jones was shot in August after a fight with a suspect being sought by a probation officer. And the two officers in South Dakota, James McCandless and Nick Armstrong, were killed in August after conducting what Rapid City authorities have said was a routine traffic stop.

The glimmer of good news in the report was the falling number of traffic-related fatalities involving law enforcement officers, the lowest since 2005. Floyd said revamped policies adopted by some departments on police chases and a revived focus on road safety helped bring down the number of those deaths.

“It’s perhaps the most preventable death for law enforcement,” he said. “Better training and better awareness of the dangers of traffic safety will help to spare more police lives as we move forward.”