The Wharton Risk Management and Decision Processes Center at the Wharton School of the University of Pennsylvania released a study that analyzes the role private insurance companies could play in offering residential flood insurance.

The year 2011 was the most costly year for natural disasters worldwide ($350 billion); in the U.S. alone, there were nearly 100 Presidential disaster declarations, two-thirds of which were from hurricanes and floods.

In the U.S., residential flood insurance is provided mainly by the National Flood Insurance Program (NFIP), established in 1968. Today it covers more than five million households ($1.25 trillion of property) across the country and has been renewed more than a dozen times over the past three years. It is set to expire again unless renewed by Congress and the President as part of a continuing resolution.

The NFIP has brought important benefits to those living in hazard-prone areas over the years. For example, in the aftermath of Hurricane Ike in 2008, it provided insured flood victims with $2.6 billion in claim payments. Hurricane Katrina triggered nearly $18 billion in claims payments, 99 percent of which were settled in less than one year. 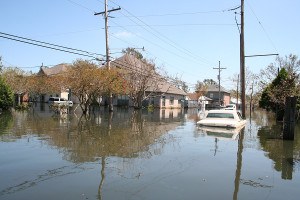 But the NFIP also faces important challenges: For example, it is now $17.8 billion in debt due to historical levels of flood claims following the 2005 and 2008 hurricane seasons, many residents in flood-prone areas are not insured, and many maps used to determine flood zones are outdated.

There is a growing consensus that the NFIP needs reforms. The Federal Emergency Management Agency (FEMA), which is responsible for the NFIP, has recently proposed several reform options, including privatization of flood insurance. Many believe, though, that private flood insurance will always be more costly than what the NFIP currently charges.

However, a study by the Wharton Risk Center suggests otherwise.

The Risk Center analyzed the likelihood of future catastrophic flooding – and the potential cost of providing private flood insurance–in a pilot study focusing on two flood-prone counties in Texas. The study found that prices charged by private insurers could potentially be lower than current prices charged by the NFIP in some parts of those counties.

The analysis calculated the “actuarially fair” flood insurance premium, based on the probabilistic risk models, for more than 300,000 residences in Galveston and Travis Counties. The Wharton study then compared these rates to the rates currently charged by the NFIP.

Based on those estimates, the report shows in the regions analyzed that there are certain areas where NFIP premiums, are, on average, “too high” (and other areas where premiums on average are “too low”).

“This presents opportunities for private insurers to provide coverage in some of those areas, to complement the NFIP,” said Erwann Michel-Kerjan, Risk Center managing director and study co-author. “There are several practical barriers that would need to be addressed for private insurers to sell such coverage, but if done, this could significantly increase the number of residents with proper coverage, thus reducing the need for government disaster relief.”

The study also performed detailed cost-benefit analyses for various flood mitigation measures, and found that elevating residences can significantly reduce the likelihood and consequences of flood damage in some areas. This is most cost-effective for new construction, highlighting the importance of enforcing building codes in hazard-prone areas.

Study co-authors Jeff Czajkowski, Howard Kunreuther and Erwann Michel-Kerjan note that this report proposes the first detailed methodology for a quantitative analysis of the pricing of private insurance with current NFIP premiums and quantifies the cost and benefit of flood risk reduction measures. It also shows to key stakeholders the importance of quantification in helping determine more effective public policies.

The Executive Summary and full report, “A Methodological Approach for Pricing Flood Insurance and Evaluating Loss Reduction Measures: Application to Texas” are available online at www.wharton.upenn.edu/riskcenter.

Source: Wharton School of the University of Pennsylvania