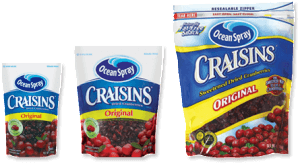 Ocean Spray on Friday expanded its ongoing recall of some of its Craisins dried cranberry products to include five more “Best By” code dates, because the packages could contain very small metal fragments.

The recall involves 5-ounce, 10-ounce and 48-ounce packages of the sweetened, dried cranberries that were sold in the western United States. The hair-like metal fragments are unlikely to cause injury if swallowed, Ocean Spray said.

Spokesman John Isaf told The Associated Press in an email Friday that the company experienced an equipment malfunction in its Markham, Wash., dried cranberry manufacturing facility and that the source had been identified and is in the process of being corrected.

Isaf said the company “discovered a tiny fragment in 1 of the packages and then notified the FDA and began the recall process.”

The recall was originally announced on Nov. 25 and involved 17 “Best By” code dates. Ocean Spray said it has yet to receive any consumer complaints of metal fragments. No injuries or adverse effects have been reported so far, the company said.

Ocean Spray said consumers should destroy the product, but save the UPC code and best buy date and contact the company for a coupon for a replacement.

The recalled product lots (only dates followed by the letter M are affected) are: